Sometimes it happens that certain playwrights have a ‘moment’, a period during which their work suddenly taps into the creative consciousness bubbling just beneath our feet and causes multiple dramatic fountains to burst through.

At Liverpool’s Everyman Theatre, it feels as though the East German writer Manfred Karge is having just such a moment. The resident rep company’s Conquest of the South Pole took audiences on a memorable journey earlier this year, while Wales Millennium Centre’s Man to Man takes over the Everyman auditorium this week.

OK, so a brace of shows in a year isn’t exactly a Karge festival, but it’s two more than I remember in any previous year, and besides, it’s only a matter of months since the man himself met a group of devoted fans over drinks in the theatre’s bar.

He has been described as “the last living link to German theatre’s golden age”, and having been handpicked by Helene Weigel, ex-wife of Bertolt Brecht, to join the famed Berliner Ensemble in 1961, he commands respect at the very least. Suddenly the opportunity to catch his two greatest works in a matter of months feels like a theatrical chance everyone should take.

So having been perplexed and beguiled by Conquest back in April, how was my second Karge experience of 2017? 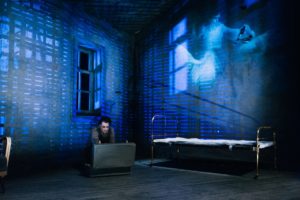 Man to Man was originally performed in 1982, predating Conquest by four years, and is an altogether slimmer piece of work. But with its cast of just one woman – an astonishing performance here by Maggie Bain – and a set that hides a multitude of secrets, it delivers a riveting 75-minute prowl across the face of Germany’s recent past.

Bain plays Ella Gericke, a woman in pre-war Germany who takes on the identity of her dead husband, Max, in order to keep money coming in via his job as a crane operator. She slips and glides between the two characters, switching from a rough Scottish brogue into delicate received pronunciation as her layers of masculinity and femininity intertwine.

As the deception takes hold, and Ella/Max takes ever greater steps to hide the truth from laddish workmates or women who take a shine to him/her, we realise this might be one of the most pragmatic characters ever written for the stage. Whatever is required to maintain the lie, she does it. And as Germany’s political turmoil intensifies and mutates into war, she is shockingly ready to wear the mask most likely to protect her.

Under the direction of Bruce Guthrie and Scott Graham, Bain’s performance is one of shimmering transitions and coiled power. She makes terrific use of Richard Kent’s angular set, a single grey room that belies its apparent simplicity by becoming a strange dream-playground around which she can climb like a spider, or into which she can dive like a fish. With the addition of projections and animated shadows by Andrzej Goulding, it becomes a room in name only – an enclosure whose walls can seem to melt away.

With the focus entirely on Bain, she needs to be exceptional if the sometimes heavy poetry and symbolism of Karge’s text isn’t to become a weight that pulls the play down. And indeed, her swooping, sliding manoeuvres and intense interrogation of this self-imposed gender fraud do make for a compelling performance.

While there is certainly plenty of complexity in Karge’s writing (via this new translation by Alexandra Wood), this production ensures it remains a play with a relentless narrative trajectory that tells a decades-long story in just over an hour of powerful prose. And as a show that can be stark, explosive and mysterious, Manfred Karge’s Man to Man is worth far more than a moment of anyone’s time. 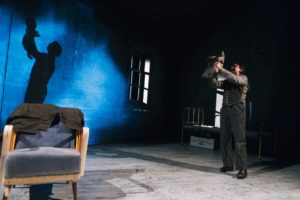 Man to Man is at the Everyman Theatre in Liverpool until Saturday October 28, 2017. For more info, visit the website.