Review: The Conquest of the South Pole, Everyman Theatre, Liverpool

Now that the Ukrainian dust has settled on the Everyman rep company’s rousing season opener – their powerful take on Fiddler on the Roof – where is this exciting band of performers taking us next?

The answer, it seems, is up to the attic. Or is it? In Manfred Karge’s play The Conquest of the South Pole, the prosaic setting on the top floor of a house is never as important as the notional Antarctica created in the characters’ heads.

Written for the Berliner Ensemble in 1986, Karge’s piece churns with poetry and ideas, politics and laughs. Although it is a response to the effect of unemployment on a group of working-class men in the 1980s, it is a world away from The Full Monty. Stylised and daring, it is a sometimes perplexing – but often exhilarating – slice of pure theatre.

This is not a play that hands you very much on a plate, so it helps to at least know the premise before seeing it. A bunch of friends is gathered in an attic belonging to one of their number – a man called Braukmann (George Caple) – as a means of passing the time. They have no jobs and nowhere to go. So rather than whiling away the hours in front of daytime TV, they launch themselves into a journey of the mind – an adventure that serves to give them a goal. 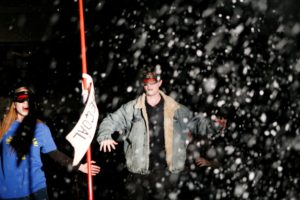 Under their ostensible ‘leader’ Slupianek, played with humour and sensitivity by Dean Nolan, they decide to re-enact Roald Amundsen’s successful conquering of the South Pole. An old washing machine becomes a huge block of ice, while the shirts, sheets and underwear hung on the washing line become mountains and crevasses stretching away to the horizon.

And thus the journey begins, the friends apparently consumed by this romantic endeavour, sinking ever further into a quest for purpose and self-worth conjured by their imaginations.

The spell is occasionally broken by the need to attend job interviews or by the appearance of Braukmann’s wife – a touching Shirley Valentine-tinted performance by Laura Dos Santos – who just wants to take down her washing. There are conflicts and confusions, arguments and fights, and the dirty reality of the class war that has discarded them is laid bare in a gruesome Mike Leigh-style birthday party scene.

But through it all, through adultery and giggles and strife, the struggle to reach the Pole goes on.

While the production ditches all traces of social-realist nitty-gritty – and you could hardly expect otherwise from a play suffused with the Berliner Ensemble’s Brechtian spirit – The Conquest of the South Pole is rich with techniques and clever touches drawn from other theatrical traditions less wedded to the kitchen sink.

For instance, it is prefaced by some exquisite, unsettling clowning by Emily Hughes, whose enigmatic character Seiffert seems to carry much of the play’s symbolic weight. And there’s barely a line of dialogue that doesn’t burst with poetry, or a set-piece that doesn’t owe something to post-war Germany’s creative tumult: the same cultural firestorm that gave us Kraftwerk and Wim Wenders, the Munich Action-Theater and, dare I say it, the Baader-Meinhof Group.

As a result it feels thrilling to see such work on a regional theatre’s main stage, a treat I suspect has only been enabled by the Everyman’s ongoing rep company project. So all credit to the venue, particularly associate director Nick Bagnall, who directs this production with nuance and flair, and a commitment to theatrical exploration. 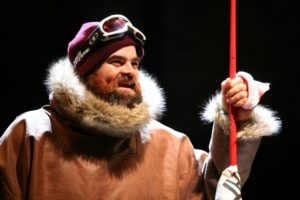 The spare, make-do-and-mend feel of the stage set – hardly a set as such, more an arrangement of props – together with Aideen Malone’s lighting and the aching melancholy of James Fortune’s music, all give the company an unfettered context in which to roam dangerously free. And if the word ‘dangerous’ sounds like hyperbole, just wait till you see Dean Nolan’s raging Slupianek wielding a saw. I couldn’t help hoping the St John’s Ambulance gang were in attendance, just in case.

There are precious few opportunities to see shows like this beyond theatre’s outer fringes – shows that stretch audiences and make real demands of them, that confront and challenge while delivering laughs as deep as any episode of Father Ted.

At its best, it’s extraordinary stuff, and though it may only be the second stop on the Everyman company’s season-long journey, it already feels as though having conquered this captivating, confounding play, they may have scaled their most challenging peak.

What: The Conquest of the South Pole