Book Review: Don’t Hold My Head Down by Lucy-Anne Holmes

Emma Yates-Badley May 4, 2019 Authors & Reviews, Books Comments Off on Book Review: Don’t Hold My Head Down by Lucy-Anne Holmes 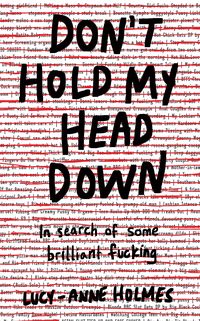 It’s a powerful investigation into how women are treated in a patriarchal society. Women should be sexually available or else we’re too frigid, but never too available. Women should be sexually active/experienced, but there’s a line between just the right amount and needing to pin a scarlet letter to the lapel of our favourite jacket. Women should have the joints of a contortionist, be plucked like chickens and preened to within an inch of our lives. Of course, I’m exaggerating for effect and attitudes towards female sexual desire are changing but, let’s face it, they’re not changing quickly enough.

Growing up in the age of the lad’s mag, these were genuine things women my age would have thought (or been told to think). With the rise of technology and access to pornography, the situation isnt getting any easier for today’s young people. No wonder we’re all so confused about sex.

Throughout Don’t Hold My Head Down, Holmes, founder of the successful No More Page 3 campaign, champions the importance of changing the narrative, of women asking for exactly what they want in bed without fear of being laughed at, silenced, reproached or feeling a bit ‘weird’. But she also acknowledges that this feels utterly alien, uncomfortable and bloody scary.

Somewhere along the line, we’ve lost our ability to communicate to our potential lovers, particularly the opposite sex, exactly what we want and, more importantly, what we don’t want. Women have been conditioned to put male pleasure before their own (argue with me if you will but this is the hill on which I have chosen to die) and this kind of sex, or “normal, slightly porny sex” as Holmes puts it, isn’t doing anyone any favours. She writes: “I never really thought I could or should respond to this, or any of the gripes I had with formulaic sex. I was passive. I’m not proud of it. I just thought that was what sex was. It hadn’t dawned on me I could really get involved and start shaping the sex I wanted to have.” 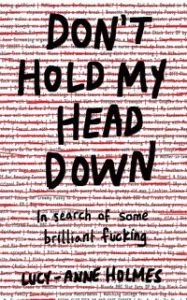 Well, right and wrong. Holmes isn’t afraid to delve into the tough stuff and pick apart our learned behaviours when it comes to the art of the no pants dance, but she does so with great candidness and laugh-out-loud-possibly-wee-your-pants-a-bit humour. It’s relatable not simply because of the subject matter, but because her writing style is accessible and warm. Holmes speaks to women and, at times, it feels like she’s reached inside your skull and pulled out your deepest darkest insecurities and fears. She not only talks about her own search for pleasure via her list – “less bucket, more fuckit” – but her wish to change our attitude to sexual desire for the next generation of women.

Don’t Hold My Head Down is comical and written in that incredibly chatty, almost babbling, way that makes it feel like reading a letter from a friend. But there were times when the text could do with being more honed and I found some of the sentences a bit too long and the joke too drawn out. Now don’t get me wrong, I can waffle with the best of them (Northern Soul’s lovely Editor will attest to this) but sometimes less is more.

It’s a whirlwind of a read. One minute I’m laughing, the next I’m feeling utterly dismayed and thinking about my own attitude to, and experience with, sex as a 30-something woman. Funny, thought-provoking, courageous writing.

And anyone who consistently uses the phrase “wanky balls” is ace.

Don’t Hold My Head Down by Lucy-Ann Holmes is published by Unbound and available to buy now.