Theatre Review: The Way I See It, The Talleyrand, Levenshulme

Chris Wallis May 9, 2019 Arts, Theatre Comments Off on Theatre Review: The Way I See It, The Talleyrand, Levenshulme

The Way I See It does exactly what it says on the tin.

Written and performed by George Miaris, it’s the life of a high street described in free verse by an omniscient narrator. Miaris’s performance is a tour de force. He conjures a vivid picture of a high street we all recognise, the café where Barry has the same full English breakfast every morning before visiting the charity shop run by Mallory. Mother-of-three Sandra is in the supermarket tired out and longing for another life. Ty, on his BMX, is embarrassed, caught while he’s aching for a girl. Miaris inhabits all of these characters and others as we follow them through their day.

Like watching Shakespeare, it takes a while to get your ear in and the verse leaps around from form to form as does Miaris, contrasting athletic exposition with moments of perfect stillness. He’s pretty exhausting to watch and, if I was him, I’d slow some of it down a bit just to let the imagery settle. As a form and in his choice of diction, to my ear it owes quite a bit to Adrian Henri and the other Liverpool poets, using ordinary language and intimate imagery in surprising juxtapositions. 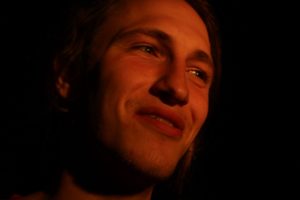 Miaris’s set, for that is what it feels like, is a jazz improv broken up by songs written and sung by Beja Flo, an intriguing waif whose vocals are more atmospheric (like the call of a muezzin over the town) than directly engaging. There are also some projections by Dee Dixon which were not favoured by the venue as the seating prevented many of us seeing them and watching the show at the same time.

The Way I See It has been described in another publication as akin to a Dylan Thomas Mancunian version of Under Milk Wood. That’s a fair enough description of the content although Miaris’s verse didn’t quite hit the heights of Thomas’s exquisite poetry. But Mairis is just getting started. On this evidence, he’ll go a long way.

Tags: Chris Wallis, Levenshulme, The Talleyrand, The Way I See It, theatre