One look at Ciaran Bagnall’s marvellously monumental set and we’re back in the 1970s, a world of white surfaces, chrome, and chunky design.

It’s the world of the Troubles, antiquated fertility treatments, and Dutch Elm disease. Yet David Rudkin’s infrequently-revived play Ashes is not as tied to its time and place as you might think.

In part this is because the play is never just telling a story. We follow an infertile couple, Anne (Katy Cavanagh) and Colin (Colin Connor), on a journey through fertility treatment, pregnancy and adoption. Scenes are occasionally dated to the month and year but there is always more going on.

Characters soon break the fourth wall to address the audience, sometimes as themselves, sometimes in the third person. There are only have two main characters and the way their quest draws them inwards is attained by the interaction with other people they meet, played by Kate Creegan and John Branwell. 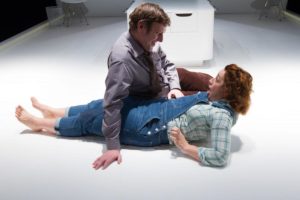 Though these supporting performances are not identical, doctors, ambulance drivers, social services personnel, receptionists and nurses are all much of a muchness.

It’s about alienation, of course, and initially seems very solipsistic. But Rudkin has a reason for skipping the everyday relationships with friends or family which might have cluttered a more realist piece. Instead we go deeper, into the male and female psyche, and wider, out into society.

The main vehicle for this exploration is a number of grippingly poetic monologues combining sexuality, motherhood, marriage, belonging, violence, tribalism and much more. These feel less like an interruption of the real action and more like an uncovering of where the real action is taking us. The two leads end the play with one each; Colin’s horrified account of attending the funeral of a relative killed during the Troubles, and Anne’s shocking dream of planetary and personal extinction. It says a lot for director David Thacker, and for his two leads that the transitions between story and monologue are so adroitly handled.

The risk is that the ideas (and there are many of them) will slow down, clog, and overwhelm the production. But we’re kept on board by a light touch, with comedy drawn from the many embarrassing moments having to think about sex will produce in us uptight Brits (the ‘successful’ urine sample is granted an 18th century anthem and spotlight).

Cavanagh and Connor give us two likeable central characters, with a rapport encompassing a staggering range of moods and situations, including a final image positioned on an edge between hope and despair. And the visceral drama of childlessness isn’t crowded out.

Ashes is at the The Octagon Theatre in Bolton until March 11, 2017. For more information, please click here.