When you think of an igloo does Pingu spring to mind? My imagination immediately drifts towards Antarctica rather than Manchester city centre.

Spinningfields eatery The Refinery has produced something more tent-like than pop-up igloo, in partnership with Copper Dog whisky (who seem to be all over Manchester during the festive period). 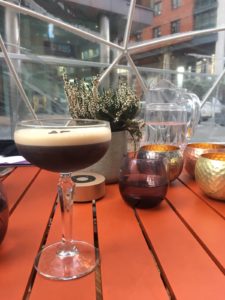 That’s not to say they’re naff and sweaty like the two-man contraption your Dad used to pop up on camping trips. On the contrary, they’re super fancy igloo-shaped tents kitted out with enough gear to suit your every wintry need. At first glance, the two transparent globes might look a little gimmicky but, once you’re snuggly zipped up inside, it becomes a nice little break from the world.

Each pod – or igloo – seats eight to ten people and comes with comfy faux-fur throws, baskets full of blankets and thick woollen jumpers and hot water bottles. The Bluetooth speaker system is a nice touch. As is the actual copper dog hanging from a leafy centrepiece.

Ours was a lunchtime booking, so I don’t think we got the full effect. I imagine booking one of the igloos in the evening would be much more atmospheric – and I reckon the street sweeper wouldn’t be whizzing up and down so often. 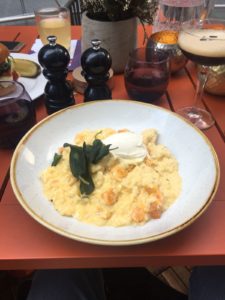 I opt for a halloumi burger and chips – the veggie dish of champions – which comes with roasted red peppers and a chunky Portobello mushroom, and my friend chooses the butternut squash risotto. We’re both defeated by the huge portions – especially my mate who tells me that the risotto is tasty but a little rich given the amount on his plate.

But there’s always room for pudding and our lovely waitress (the staff at The Refinery are always so accommodating and friendly) suggests we try her two favourites: chocolate brownie and crème brûlée. How can we say no? As expected, the dishes brought to our table are massive. The crème brûlée could easily be shared between two people and, even then, I’m not sure you’d be able to finish it. However, they’re so tasty that we keep picking at the puds until our waitress comes to retrieve the bowls. 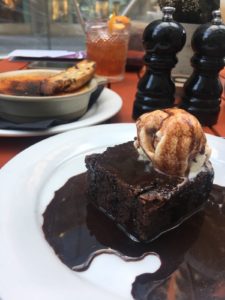 “Please take them away from me,” I half joke.

On to the drinks. I’m a huge fan of whisky – although I don’t know much about it – so I select a Caramel Apple Toddy (Copper Dog, caramel syrup, apple cider, ginger ale) from the Copper Dog menu and, later, an Old Fashioned. My friend – not a fan of whisky – opts for a Vanilla Espresso Martini and, one of the restaurant’s most popular cocktails, a Candy Shop (gin, rhubarb and custard liqueur and lemon). The Refinery does cocktails extremely well.

Over the festive period, the igloos will offer an exclusive selection of Copper Dog hot toddies and cocktails, as well as a dedicated food menu features small plates such as seared sirloin with Copper Dog mustard, and BBQ pork sliders. There are a couple of veggie things on this menu too.

With the party season fast approaching, the igloos are a fun alternative to the usual crowded restaurants or the chilly Christmas Markets.