The simple, yet complicated relationships of women are often overlooked in theatre, unless it’s to make some sort of point, or a political score. I don’t think we celebrate women just being women enough. By that, I mean the small things: the feeling of anticipation we get when we know we’re going to meet a friend, or that nugget of shared interest that we store in a box in our brains to tell our female friends, anticipating their smile, the laugh, the joy of communication and reciprocation. Perhaps there’s a fear of alienating male audience members with an all-female cast, or maybe there’s still an aversion to female-centred comedy or drama because it’s seen as over emotional and over dramatic or unfunny, because women can’t be funny, can they? **rolls eyes**

It is testament to Amelia Bullmore’s writing that a theatre will trust that none of this rubbish will matter in the face of skilful writing. And this is good writing. I was absorbed from the start, caught up in the speeding train that runs through the lives of three women, Di, Viv and Rose, who meet at a northern university, and form a solid bond that lasts their entire lives. It’s one of those plays that you think is going to be fluff, but turns out to be a blast of fresh, funny, moving air. 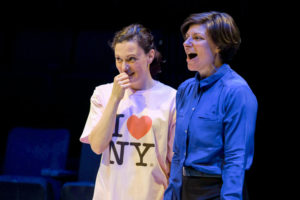 I was so pleased to see such a good turnout for the play and so many young women and men in the audience. Too often theatre audiences are average age 60 + but last night, it felt like we’d all come together to experience something communally. It was proper entertainment. My husband enjoyed it as much as me, especially the soundtrack which pin-pointed the changing times better than any scene change. I began mentally mapping my own life alongside the play, identifying my own big life events through the music, and by doing so I was getting closer to those brilliantly acted characters and their friendship dynamics.

I cried three times through this play and I laughed more times than I can count. For me to cry in public is a biggish deal, I wear emotional armour. But when I looked up from wiping my eyes I could see that 80 per cent of the audience was crying with me, and the same with the laughs. People slapping their knees, creased with laughter, passing a shared glance between others on the row, being completely in the moment. What a great thing it is, to feel a whole room full of people enjoying themselves. 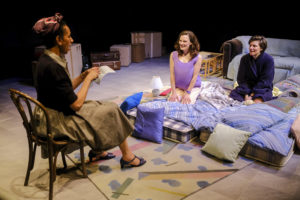 The characters are bigger than life, Bullmore uses their very different personalities to really pin-point the scaffolding on which a friendship can be built. It’s a funny, funny script and, although the drama in the lives of these three friends does feel like more than the average for normal people, it doesn’t feel contrived so much as a tool for entertainment. An all-female cast which consists of only three characters, with everything else out of shot, works to really gel the audience with them, to the point that you are genuinely sad and happy for them. That is skill, that is good writing, good directing and great acting. I loved every minute. If I was to offer criticism it would be that the first half made my bum a bit numb, and I was hankering after my Sauv blanc about twenty minutes before the interval. But otherwise I was completely absorbed. The SJT is really shining this summer season.

Di and Viv and Rose, is at Stephen Joseph Theatre in Scarborough until August 26, 2017.