The starting point for this Royal Exchange Young Company production, directed by Matt Hassall and created by the Manchester Theatre Award-winning company to note fifty years after the decriminalisation of homosexuality in England and Wales, was the question “what is it to live in a world that denies you your most simple human right – to feel love, to share love and to be in love?”

There’s no simple answer to that question, of course, and this brave, kaleidoscopic show is inspired by stories, people and experiences, “allowing the memories and ghosts of lost, broken or forbidden love to have a second chance.” Often these real people have described living a double life – one that conformed to expectations, alongside another underground life that allowed them to be liberated and free – and the show quite literally takes place underground, in the unexpected and, for almost all of the promenade audience, unexplored spaces that lie underneath the Royal Exchange and St. Ann’s Square. 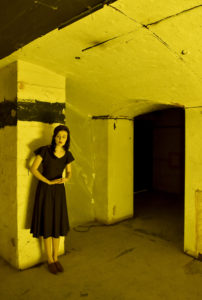 As an audience member, after assuming an identity (the purpose of which becomes increasingly clear as the show progresses) you firstly gain entrance to The Nook club in 1957, where nervous intimacy between two men is signified by a dance. Soon, the audience are encouraged to join the dance and continue to find themselves immersed in the story as the performance progresses both through key scenes in the history of gay life in Manchester, such as the Clause 28 rally of 1988, and also hidden areas of the Royal Exchange, fascinatingly including The Hovel.

I did occasionally find myself wishing to explore these evocative spaces more than we were allowed to, but that’s absolutely no reflection on the company members, whose performances, inventiveness and adaptability remained of a remarkably high standard throughout a compelling and imaginative show.

We Were Told There Was Dancing is on at the Royal Exchange until August 20, 2017. For more information or to book tickets, click here.