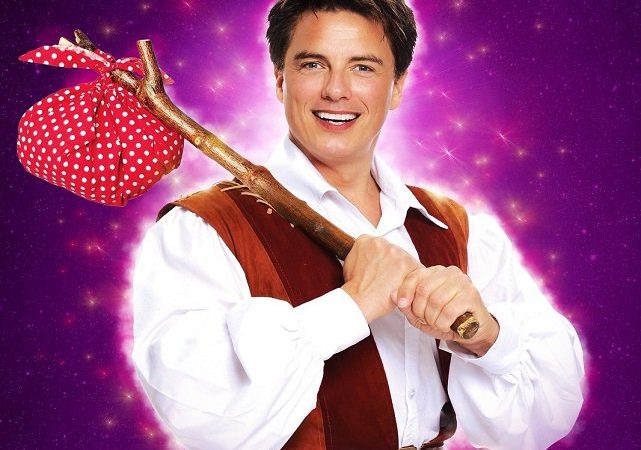 When I announced to the folks at Northern Soul Towers that I’d never been to a pantomime, they looked at me like I had two heads. Clearly, I am the victim of a deprived childhood and the consensus was that, at the age of 32, it was time to rectify this mistake.

I’ve never been that fussed about panto season. It’s something about the audience participation and screeching of ‘he’s behind you’ that doesn’t appeal. But, in the spirit of British Christmas tradition, I decide to give panto a chance and take a solo trip to see a production of Dick Whittington at Manchester’s Opera House.

As I take my seat, and the woman behind begins gabbing at a volume audible from space, I start to feel a bit like I’ve made a mistake. I unscrew the cap of my miniature bottle of red, pour a healthy dose into my plastic beaker and brace myself as the lights go down.

What I’d originally thought was a slightly bonkers pairing – John Barrowman and Scottish comedy duo The Krankies (Janette and Ian Tough) – was strangely successful. The chemistry between Barrowman and Janette Krankie is evident with the two often veering off script and out-smutting each other. 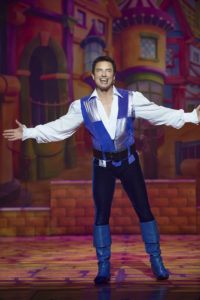 Traditional pantomime suggests a host of Z-list celebs, a Dame and more audience participation than makes me feel physically comfortable. But there doesn’t seem to be much of that here. The writers have taken a pair of scissors to the plot of Dick Whittington and it contains little of the original tale. However, the odd storyline works and there’s not a dull moment (apart from the song about baked goods – that was just weird).

From the moment he arrives on stage – strapped to a jetpack and sporting the tightest pair of velvet trousers I’ve ever seen (“Did you see Barrow ‘lil’ man?” my friend joked later when I recalled the outfit) – Barrowman is brilliant in the role of Dick. He’s got a cracking voice which he displays throughout the evening – reeling off catchy pop songs and a couple of cheesy panto ditties.

The Krankies are equally fantastic as Councillor Krankie (Ian Tough) and Wee Jimmy (Janette Tough), delivering one-liners with hilarity. For me, the absolute star of the show was Wee Jimmy whose near the knuckle jokes provide some of the funniest comedy I’ve seen. Think camp silliness with just a smidge of filth and you’re probably only half way to the stuff coming out of Wee Jimmy’s mouth. It’s as innuendo filled as you’d expect for panto – and then some. 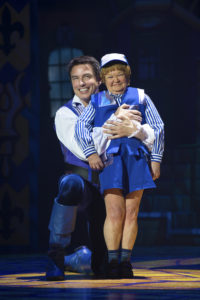 Like most comedy acts, the best moments are when things go wonderfully wrong and there are several of these incidents from a sticky door to an accidental stripping, as well as a chaotic play on The 12 Days of Christmas. The latter was full of slightly outdated jokes and stereotypes that wouldn’t be missed from future productions. Yes, it’s panto. But it’s also 2017.

Laura Hampton and Jacqueline Hughes are great as Alice and The Spirit of Bow Bells (although it only took about 20 minutes for Alice’s sickly-sweetness to irritate me). Phil Corbitt plays the evil King Rat well but there’s an unshakeable air of The Hitcher from The Mighty Boosh about him – all that’s missing is the polo mint. Perhaps it’s the overt cockney accent, but I half-expected Vince and Howard to pop out from behind a curtain.

The ensemble and local dance academy did themselves proud. The little ones look adorable dressed as Jammy Dodgers, and there’s an interesting scene where the dancers circle lights about the stage, but they don’t seem to offer much more than filling space between scenes. Having said that, it’s difficult to compete with the show-stealing main cast. 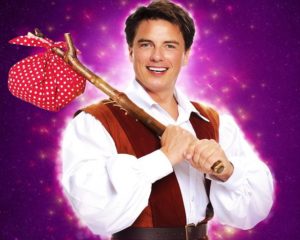 The creative team have produced a visually stunning set complete with some truly magical scenes including a sleigh, a shark and a bunch of piranhas (not things you’d ordinarily group together). There’s also the bonus of a spooky 3D segment that has the audience squealing with delight. It could be deemed a little scary for small ones, but I saw more adults jumping out of their seats than I did children.

At some points – mostly during the side-splitting moments when Wee Jimmy heads off script – the audience gasps with shock. I suppose, to someone else, the jokes might be a bit too ‘adult’ for a family show, but they make me howl with laughter and my stomach and face were aching by the end.

Would I feel like that way if I had sprogs in tow? I’m not sure. A lot of the more risqué content seems to wash over the younger members of the audience who are content with shovelling popcorn into their mouths and waiting for the moment to pop on their 3D specs. 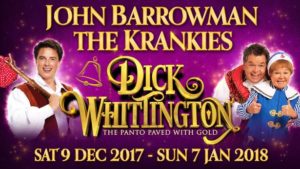 Dick Whittington is on at Manchester’s Opera House until January 7, 2018. For more information, or to book tickets, click here.

Image Gallery: Barnaby Bright presents Our Future is Ancient by Not Quite Light This multimedia work is inspired by Macclesfield Forest, and is by Salford-based artist Simon Buckley (Not Quite Light). northernsoul.me.uk/image-gall… pic.twitter.com/luytz7k4dT