From the moment we sat down, with lighting playing on the stage curtains like snowfall while the unmistakable refrain of ‘Walking in the Air’ floated around us, this was a joyous, gentle celebration of childhood imagination. Akin to a ballet for young children, there was a live orchestra (a rare treat in children’s theatre) performing Howard Blake’s whimsical score from the 1982 film and barely a word spoken for the entire running time of an hour and 45 minutes. A hefty running time, but Raymond Briggs’ simple tale of a boy who builds a snowman on Christmas Eve and then sees it come to life by moonlight before a nighttime of adventures did not feel padded out. In fact, the whole experience made for a happy antidote to the many raucous, brash theatrical options available at this time of year. No shouting, sing-a-longs or chocolates fired from pantomime cannons here, yet the even the most diminutive audience members were by-and-large captivated. 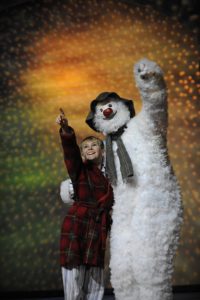 Inevitably, a highlight was the full version of Walking in the Air, at the end of the first act, which saw the nameless young boy and his snowman friend flying high on wires above the stage. Here the production resorts to a recording, but this can be forgiven since it is of Aled Jones, dueting with his younger child self from the original Diane Jackson film and bringing a further hit of nostalgia for the parents in the audience. Other memorable moments were less dramatic but equally pleasing; the snowman trying various fruit for size as his nose; the toy room coming to life; Santa’s energetic jig in the second half.

The arrival of Jack Frost brought a flash of (very mild) peril, while the en pointe Snow Princess added a dose of sparkle – there is a school of underage thought that considers any festive show incomplete without it. The snowman’s tragic demise at the end of the night’s escapades is dealt with fairly briskly before a jollier encore – probably for the best given how attached some of the watching children had become. It would be wise to gloss over some of the national stereotyping at the UN-style North Pole meeting of multiple dancing snowmen that dominated the second half, but safe to say there was a fez and some tartan on display.

Briggs purists will and already have scoffed at the show’s deviations from his original 1978 picture book, but such gripes should be taken as coming from a grinch akin to the misanthropic Father Christmas in the author’s other great classic. The twirling forest animals, comedy penguins and limbo-ing giant fruit (you read right) made little eyes sparkle, and therefore I struggle to care that they are less than authentic. The longevity of this live stage version would suggest, furthermore, that I am in the majority. It has been putting bums on seats in the UK and elsewhere since its 1993 Birmingham premiere, and attracting audiences to London’s Peacock Theatre for a record-breaking 20 years. Long may it continue – and soon may it return. 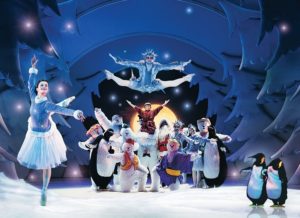 The Snowman is at Manchester Opera House until November 12, 2017, and on tour.