Book Review: One Day in the Life of Ivan Denisovich by Aleksandr Solzhenitsyn 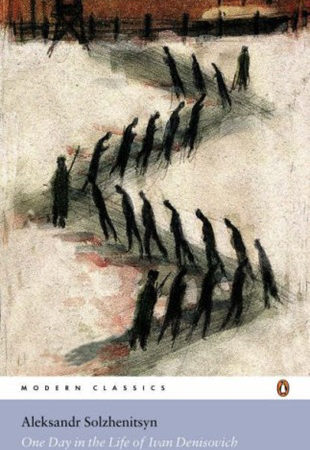 This year marks the centenary of the Russian Revolution. In the fourth of a series of articles for Northern Soul, Alfred Searls explores how 1917 – and the Soviet society which developed in its shadow – has been portrayed by writers since that momentous year of revolution.

Between 1929 and 1953, an estimated 18 million soviet citizens passed through the Soviet forced labour camp system; around three million didn’t survive the experience.

In 1945, Captain Aleksandr Isayevich Solzhenitsyn became one of those 18 million, and for eight years he endured the misery, injustice and insanity of the GULAG. The young captain of artillery, whose ‘crime’ was to include a few mildly derogatory terms about Stalin in a private letter to a friend, was pulled out of combat so he could be uselessly tipped into the ever-open maw of systematised Soviet slave labour. Thankfully for us he not only survived his incarceration but went on to describe his experiences in a series of remarkable books, the first of which was One day in the life of Ivan Denisovich.

Ivan Denisovich is the patronymic name of convict SHCHA-854 Shukhov, of the 104th work gang – address, hut 9 the GULAG. The GULAG, an acronym for the Soviet government department that administered the work camps, served to furnish the Red Tsar Stalin with a ready supply of slave labour in order to meet the needs of both Soviet industry and the seemingly endless parade of capital projects, many of them utterly pointless, dreamed up by the leader of the workers’ paradise. But more importantly, of course, it served as an instrument of mass terror. 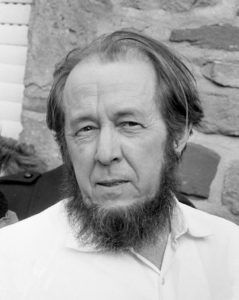 Please have a care for comrade Shukhov as you follow him through his day. He is a decent and simple soul and, like most of those around him, he’s done nothing to deserve his sentence. From the moment he wakes up in his freezing, crowded barracks, all he wants to do is survive the day and make it back again to his sawdust-filled mattress in which he has hidden his pathetically small daily ration of bread.

To do this, Shukhov must avoid the casual wrath of the guards, the whispered betrayals of informers, the rigours of forced marches to and from the work site where the prisoners arduously toil in the construction of a power station; and all in temperatures 30 degrees below zero in a wind so cold it will freeze the tears in a zek’s eyes.

In fact, the climate is so important to the lives of the prisoners, so integral to the novel, that it becomes a character. Solzhenitsyn has a very Russian sensibility to the importance of the elements, and thus the darkness pre-dawn and post mid-afternoon is not just an absence of light, it’s an all-encompassing force that surrounds the prisoners, waiting until it can envelop them in its frigid embrace. The savage arctic wind that bites and scrapes at exposed skin ceases to be the impersonal attentions of winter, and becomes instead an unceasing assault of pure, ethereal malevolence. To this day I remain convinced that you could read this book in a greenhouse in Death Valley at high noon in August and still feel the icy chill from the pages painfully stiffening the fingers and creeping up through the arms towards the core of body and soul.

Solzhenitsyn populates this frozen land with a cast of wholly authentic characters. Amid all the mania for state direction within the GULAG, the only planned economy that truly works is that of the writer’s language. So much is done with so little. The simple yet compelling characterisation, the swiftness in which the language of the zeks (the prisoners) is imparted and the perfect pace of the prose are truly masterful.

Here the genius of Solzhenitsyn lies in part with his choice to remove himself from the novel and centre it on a character with which he cannot possibly be associated. Thus he not only liberates Ivan Denisovich from the ego and grievances of his creator, he also elevates the tone of the novel, inviting comparison with Dostoevsky’s House of the Dead or Tolstoy’s Resurrection.

Solzhenitsyn wrote a book set in the GULAG in which hope, albeit frostbitten and dangerously thin, is very much alive. Although the zeks’ cynicism about communism and the system it has created is absolute, they often retain some residual sense of dignity and humanity, sometimes derived from their collective efforts, sometimes from their personal beliefs.

Whatever the source, this meagre nourishment fuels a faint flame of optimism in the text, and this has proved to be a problem for some readers who question the absence of psychopathic levels of violence from the criminal gangs not only present in the GULAG but actually encouraged by the authorities as a method of controlling the sheer mass of people in the system. 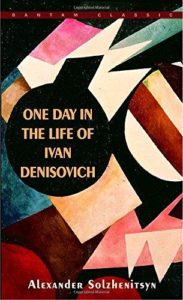 In response it must be pointed out that the camps were a vast undertaking and conditions varied greatly according to time and place. But, more importantly, it’s vital to remember that Solzhenitsyn managed to have the book published in the Soviet Union in 1962, during the brief post-Stalin ‘thaw’ under Khrushchev, and that the novel’s description of life in the camps is shocking enough by any standards.

I suspect that Solzhenitsyn and his publishers didn’t think the system could yet stand the graphic accounts of rape and murder that were to follow in works such as Varlam Shalamov’s Kolyma Tales, which would not be published in the Soviet Union until 1989. In any event, by late 1964, Khrushchev was removed from power and Solzhenitsyn and his work once again fell from grace.

In the opinion of this humble zek, Aleksandr Isayevich Solzhenitsyn has earned his place among the greats of Russian literature. And so, comrades I exhort you, wrap up warm, hide your bread ration well and spend the day in the company of Ivan Denisovich and the lads of the 104th. You won’t regret it.