During From Shore to Shore at Manchester’s Yang Sing restaurant, we are fed the tales and the sharing plates of Chinese food.

A Chinese cast of seven play some 18 characters in the round, telling simple tales of the transgression from East to West, sewn with intricacy. Inspired by real life stories from Chinese people of all ages living in Leeds and West Yorkshire, this is not a sympathetic tale or a winsome lament of China. It is a look behind the counter, beyond the culture and success, into the lives of people who live within these communities and whose plight is practically unknown. It is also a conversation starter about how people travel from their motherland and build a community in another country to help each other to survive.

Though the stories are an amalgamation of accounts, one part of the writing team (along with M.W. Sun), Mary Cooper, tells me that every aspect has been drawn from research. Some reviewers have called it verbatim, but this is not the case, though the play does use direct quotes. 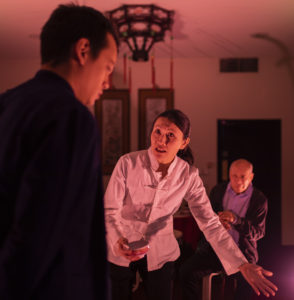 The tales are told in a mixture of Mandarin and English with a fluid motion from one language to another. Usually the cast has a predominantly Chinese audience, but this evening it was evenly mixed. Nothing was lost in translation as each language was given equal measure, tone and expression. The subtle lighting changes set each scene along with live music and singing, but these elements weaved a humble accompaniment rather than an interruption of the switch in narrative.

The performance takes place after the soup and before the main course. We share both as turning morsels, so that each audience member has an equal portion. Green tea soothes as we drink in the atmosphere created by collectively understanding that challenging journeys are worthwhile.

A number of people at my table discussed the difficulty of making steamed egg. I was advised that you must get the precise measurements. I know I won’t do it right but I’ll give it a go.

Sun and Cooper listened to a range of stories telling different tales of the transition from East to West, but the brochure and the play consisted of stories of survival. Do English people living abroad imagine they embarked on a journey of survival? Perhaps in the future we will view emigration differently? Perhaps now, as we look to a future filled with obstacles for those of us keen to move to warmer and more affluent economic climes, we may have more of a connection to the plight of others.