Emma Yates-Badley May 1, 2017 It's Not Grim Up North, Northern Soul writes..., Restaurants & Cafes, Taste Comments Off on Review: The River Restaurant, The Lowry Hotel, Manchester

The last time I visited The Lowry’s River Restaurant, it was Christmas, it was snowing and I walked back to Piccadilly train station enveloped in a festive wine jacket. Fast forward to April and it’s – slightly – warmer weather, there’s not a cracker in sight, and we’re talking about the new Spring/Summer menu.

After a small mishap where the invitation directs me to the library and a host of healthcare business folk having a networking event, we take our places around white linen-clothed tables to sample the culinary delights on offer from executive head chef, Anthony Green, for the new season.

As a pescetarian, I get a special star next to my name so the servers don’t accidentally plonk a plate of meat in front of me. The dining room is dimly-lit (a bit too softly for us reviewers who want to Instagram our dishes from ten different angles), and there are some large vases adorned with flowers which make me feel a bit like a Borrower. But it’s a lovely large space overlooking the River Irwell, ideal for functions. 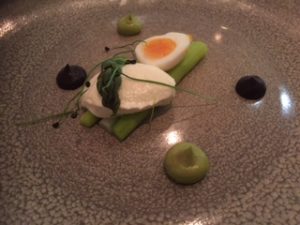 The five-star hotel is keen to promote high quality, locally sourced produce on its vibrant menu, and there’s a nice little introduction to what’s in store from Chef.

First up we’re served Yorkshire asparagus with a tasty burrata mousse (I could quite happily wolf an entire bowl of this flavoursome stuff, especially if it involved being spread on a crusty loaf – a quick Google tells me burrata is a ball of mozzarella curds infused with cream), balsamic shallot, avocado and quail egg. My immediate thoughts are, ‘that’s a lot of words for such a small dish of food’ but it’s plated up nicely and packed full of flavour. And anything that includes egg is a winner in my book.

Then it’s crab tian with vegetable spaghetti and cucumber caviar. I know some people (especially my dad) view spiralised veggies as a load of faff, but I’m a fan. It’s a fresh plate of food, both visually and taste-wise, and the crab comes with little bits of shell which lend a pleasant texture.

The third course is a playful take on a chicken caesar salad with romaine lettuce, anchovies, prosciutto and parmesan. I’ve got the herbivore version, well, the fish version, which is – I think – a cube of tuna (which has an almost sweet taste) with the romaine, anchovy and an accompanying sauce. I say, ‘think’ because it’s not listed. The River Restaurant would benefit from including the vegetarian options on the menu but, as it’s a sample tasting menu, it’s not representative of the menu in its entirety. 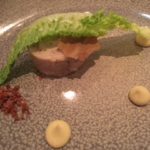 Next is my favourite dish of the evening. Line-caught sea bass, herb gnocchi, iberico ham (although mine is sans meat) sea beats and beurre blanc. The seabass is delicious, with a light crispy skin, and the sauce is lip-smackingly good. I don’t usually opt for gnocchi (it feels like a weird potato-pasta hybrid and, whenever it’s in the house, it is relegated to the back of the fridge) but I’m surprised by how much I enjoy it.

For the carnivores, there’s cannon of spring lamb with pea and nettle puree. For me, it’s fish again. But I’m not entirely sure what type of fish it is (I think it’s monkfish, my neighbour reckons it could be hake) as – while the meat-eaters get a run down from Chef – this course isn’t explained. Or, again, on the menu. I ask a nearby waiter and he identifies the dish as monkfish. I love monkfish. Like tuna steak, it’s offers us pescetarians a heartier main, and this piece is cooked perfectly. As with the lamb, the fish is served with Jersey Royals, but it doesn’t quite go with the subtle 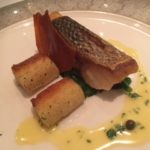 flavour of the monkfish. It’s salty, although I’m told it is matched well with the lamb. 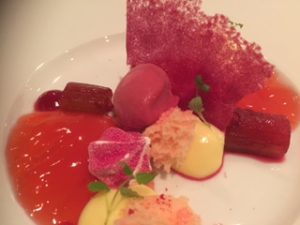 The dishes are accompanied by a selection of wines, two white – a Pinot Grigio (which I could drink by the bucket) and a French Chardonnay – as well as a red to escort the lamb dish. It all goes down a treat and I later I find myself wrapped in that familiar booze cloak as I meander up Manchester’s Market Street towards Piccadilly.

But on to pudding. I don’t like rhubarb – it takes me back to being a kid and my mum stewing it in great big batches and serving with ice-cream so frost-bitten you had to chisel off chunks of ice. I dislike the stringy texture and it’s one of those things I can’t bear to eat – like salad cream or peas. So, despite the attractive plate of food that’s put in front of me – a fun take on rhubarb and custard – I try a bit and decide I don’t like it. I think it’s psychological because Green’s pudding is far removed from mushed-up rhubarb and, all around me, plates are picked clean. However, I do snaffle the custard and bits of meringue.

So, if you’re looking for something a little fancier on a culinary night out and are after a stylish setting, then The River Restaurant is probably the place for you. The dishes are tasty, delicate and well-presented, and there’s clearly been a lot of thought put into sourcing the best ingredients from Manchester and the surrounding area.