Stephen Longstaffe May 1, 2017 Arts, Theatre Comments Off on Theatre Review: The Island, The Dukes, Lancaster

The origins of The Dukes’ latest two-hander production of The Island are legendary.

The play was created in the early 70s by South African actors John Kani and Winston Ntshona, alongside playwright Athol Fugard. Acclaimed performances in Europe and the USA followed the Cape Town premiere until both actors were arrested while touring the play in rural South Africa. Only once the apartheid system ended did the original cast return to the play. It continues to be produced worldwide, most recently in China and the Israeli-occupied West Bank.

The island of the title is Robben Island, a maximum security prison which, until 1991, housed black political prisoners of the South African apartheid regime; Nelson Mandela served 18 years there. The play follows two prisoners, John and Winston, as they grapple with life inside, thinking about what they have left behind and what the future holds. The catalyst for the action is a two-man production of Sophocles’ Antigone which they are planning to stage for prison entertainment. The political resonances of Antigone’s plight – the State has declared her dead brother a traitor who must remain unburied – are clear. The play-within-a-play ends with her, having buried her brother, being sentenced to a ‘last journey’ – to The Island. 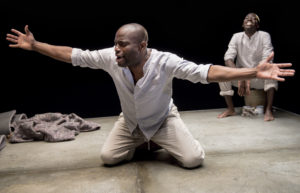 As witnesses to apartheid and co-creators of the play, Kani and Ntshona are a tough act to follow. But Edward Dede (Winston) and Mark Springer (John) more than make the grade. Together they take the characters from the lightest of comedy moments (a mock phone call home, acting out a Western) to the deepest of emotions. Their final direct addresses to the audience, as Antigone and Creon the king who sentences her, are powerfully charismatic. Dede’s sensitivity is nicely complemented by Springer’s physical presence.

We think of prisons as places of stillness and stasis, but director John Terry does an excellent job in filling the play with movement and energy. The soul-crushing emotional and physical labour of John and Winston’s imprisonment is the keynote of the play’s opening, a mime of back-breaking, pointless, shovelling and tipping, where to speak is forbidden. We are ten minutes in before we hear the first word, but we know what they are up against.

The Dukes’ intimate studio setting means every nuance is clear. Lighting and sound design, unobtrusive for the most part, powerfully interrupt the more intimate aspects of their relationship with jarring reminders of the everyday alienation of the situation. Given its iconic status as witness to apartheid, it’s particularly important for productions of this play to look and sound authentic. My most recent trip to the theatre was marred by a terrible case of Wandering Generic American Accent, but here I really believed I was listening to South Africans. It’s a mark of this production’s respect (in the best possible sense) for the original play as an act of witness to get such things right.

You need to hang in there with the play’s opening as it takes a while to reset your expectations of how plays begin. My only criticism of this production centres on the mime: the actors needed to put their backs as well as their arms into it as the sheer weights they were working with didn’t really come over. But Springer and Dede make a magnetic team in a play which is still highly relevant and vital.

Where: The Dukes, Lancaster

When: until May 6, 2017 in Lancaster, then at Oxford, Chipping Norton, Bristol, and London