In the interval of Tennessee Williams’s first play, The Glass Menagerie at the West Yorkshire Playhouse, I overheard one broadsheet critic (who shall remain nameless) say to another: “It’s all very well but why drag us across Yorkshire to watch a radio play.” To be fair, at that stage I had to agree and so did pockets of the audience who left at the interval.

I’m not selling this well so far but it does get better. Honest. Let me try to explain.

Remember when Masterchef became a legitimate contest for serious chefs? You know, when steak and chips didn’t cut it any more and Lloyd Grossman got the boot in favour of that baldy greengrocer? When actual professional chefs started taking steak and chips, deconstructing it, putting it in a water bath, dipping it in liquid nitrogen and serving it on a giant spoon whittled from a pine tree that still smelled of the forest? Or what about when art stopped being about painting and form and craftsmanship and became about concept, about video jams, and about artists being their own art work? Well, Headlong does that but with theatre.

I’m still not quite promoting this the way I mean to. It sounds like I’m saying it’s shit. I’m not because I quite like deconstructed chips (I actually don’t know what a deconstructed chip is. Is it, like, err, mash?) and I do like modern art (even though Caravaggio still gets my number-one-artist-ever slot). And pissing about with old things, making them relevant and new is exciting. It stops us getting all reverential about the past and what went before because, let’s face it, them lot back then were making it all up too.

This new production is innovative and brave, but that doesn’t necessarily mean it’s mutually exclusive of the essence of some ancient theatrical experience. Yes, get rid of the set. Good lord, who needs costume changes? Just let the words shine and the performances dazzle, baby. Do all that and it’s very modern but it’s also Greek theatre is it not? And so we come full circle and history repeats and we’re all connected through the annals of time and that makes us feel less alone and that sort of neatly segues us to the Headlong show.

Greta Scacchi is shatter-proof in the role of Amanda and invokes the spirit of Bette Davis in her portrayal of the weary, middle-aged mother who lives vicariously through her children, dreaming of her time as a young beauty when beaus came to court her in their dozens. Her crippled daughter, Laura, is a delicate bauble in the hands of relative newcomer Erin Doherty – this actress is defintely one to watch for the future. The boys gleam too with Tom Mothersdale as the haunted Tom and Eric Kofi Abrefa as the gentleman caller, Jim. 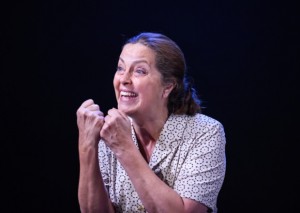 Director Ellen McDougall and designer Fly Davis have realised a stark, monochrome world encased within a black box for the dissatisfied family. There’s nothing but a couple of lamps, a telephone receiver and a snow globe to occupy them (and us), giving the audience good reason to feel as trapped and ineffective as the characters.

The slow pace and bare stage takes a while to adjust to but the pay-off in the second half is worth the endurance test. Tom’s constant visits to the movies suggest that yes, his world is so drab and devoid of adventure and movement that the draw to the flicks is understandable. We’re inside his mind throughout. We’re seeing things the way he does (albeit at times a little too moody teenager for me) and he watches, like some dumbstruck ghost, as his family fall apart.

Headlong, under the fairly new leadership of Jeremy Herrin, are continuing to explore the kind of theatre that his predecessor Rupert Goold made. Unlike the fragile glass menagerie of tiny animals owned by Laura in the play, Headlong’s reputation seems, so far, unbreakable.

What: The Glass Menagerie

Where: West Yorkshire Playhouse with Headlong