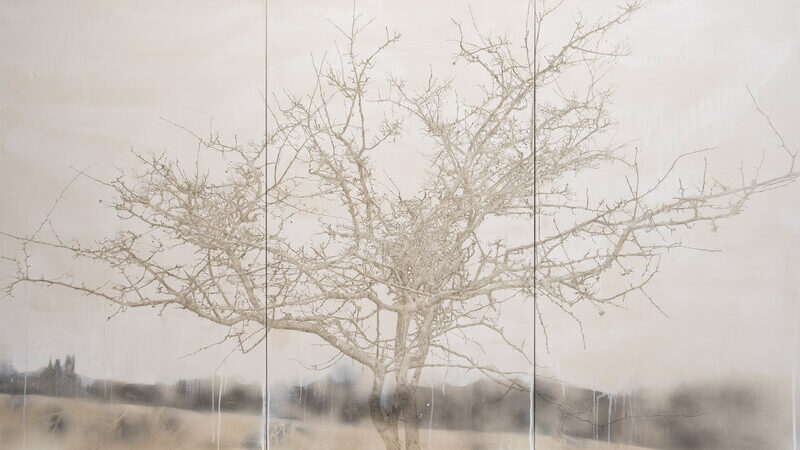 The John Moores Painting Prize brings together the best in contemporary British painting.

Due to the COVID-19 pandemic, Walker Art Gallery in Liverpool is currently closed and so the biennial John Moores Painting Prize, which has been running for more than 60 years and is now in its 31st edition, has been replaced by a virtual tour. Here, two of Northern Soul’s visual arts contributors, Sara Riccardi and Nancy Collantine, take the tour of 67 works. Riccardi is an art historian and founder of Art Across while Collantine is an artist who specialises in painting and site-specific art. Collantine runs an artist-led temporary exhibition programme called Dez-Rez Projects.

Sara Riccardi: The Common by Kathryn Maple is the top prize winner in this year’s John Moores Painting Prize. While I realise that I’m looking at paint on a surface, I’m also surrendering to the illusion of a gathering of people in a beautiful garden. I’m intrigued and I want to know who these people are, what they are doing and what they are saying. I’ve stumbled across something interesting going on and I want to join in. 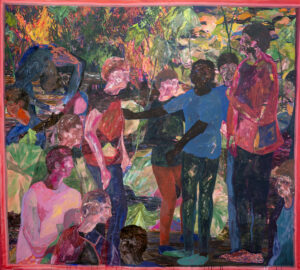 Nancy Collantine: Painting wields a mysterious ability to suspend our disbelief by using so little. After all, it’s just paint, form and colour. For instance, the sweep of black hair in Miho Sato’s Windy Day is an implied refusal or a resistance to being looked at. It’s a masterstroke in pared-back meaning. 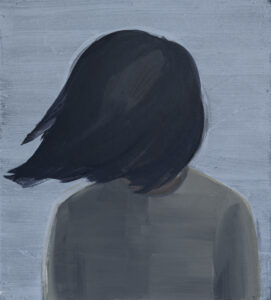 Then, in Matthew Krishanu’s Riverboat, two boys perched on the bow of a boat lead us through a flat, watery landscape. There’s little to distract us from the figures and the voyage through the clear bright light of the paint. 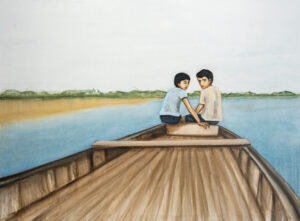 In Stephen Lee’s mysterious landscape, March, a bent over hat-wearing figure with an obscured face works with a strange pale mass of organic forms besides a furless pink dog. While reading the text for March, we learn that the painting began with the artist pruning a willow tree which, rather than elucidate, adds to the dreamlike oddness of this painting.

Nature feels benevolent in Lee’s piece. But in many others, nature takes on a darker undertone. The ominous plant in Motherland by Steph Goodger seems to crouch menacingly, ready to assault on strong legs. 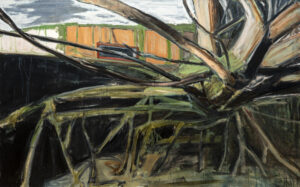 The unclothed and bleached Hawthorn by Melanie Goemans is mildly yet sharply observed. LANTAIN’s rusted leaves hang from a decrepit vine clinging to the interior of a deserted stately glasshouse in Hortus Conclusus: le rouge et le noir. The jury has selected artists who elevate the natural world from the role of the passive observer to the main protagonist. Vegetation is given a far meatier role. 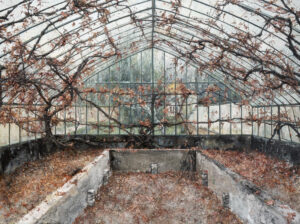 SR: I love how natural elements in these pieces are described with a certain accuracy and I’m impressed by Goemans’ Hawthorn. I agree with Nancy that nature’s role goes beyond representation, it seems to be animated by different feelings. I immediately think of Marianne North [the prolific English Victorian biologist and botanical artist] as she travelled the world in the 1800s studying all sorts of flora. She adopted a scientific approach, but the trees and flowers in her paintings are all strong characters in their own right, sometimes majestic, sometimes threatening. 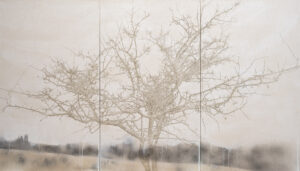 NC: The tree is a sinister character in Mrs Walter Lang by Pat O’Connor. It acts as the meeting point for a clandestine gathering of two women, both wearing red. In A Year of Ghost Wishes by Lara Cobden, greenery surrounds a dark leafless tree where shadowy puffs of something unsettling grows. A girl on a three-legged ladder reaches up for this strange fruit, while nearby a boy hugs himself mid-shudder. Perhaps these trees represent memory and bear witness to human misdeeds. 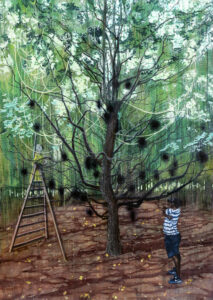 The viewer is urged to do much of the heavy lifting in the majority of the paintings in this exhibition and we’re expected to fill the gaps with our imagination. There’s also a real sense that the pieces are not quite finished, or perhaps betraying a weightlessness or instability. For example, I can tell the figure in Sikelela Owen’s painting The Knitter is loved beyond earthly measure because, while we’re looking up at the figure, everything around it is dissolving. The ethereality of the paint permits light to shine through and it all adds up to a divine meditation. 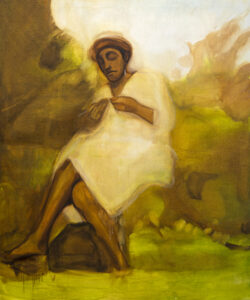 SR: Ambiguity is used to slowly capture the viewer’s attention in Leah Michelle Cayol’s Lickkle Man. At first glance, it’s a portrait of a young boy. But behind him are two figures dressed in Nike sportswear, both cropped so that we can’t see their heads. As I continue to look, I see a number of possible narratives. But I can’t quite put my finger on what is going on. 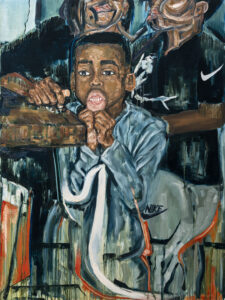 NC: It’s the mismanaged paint in Laura Lancaster’s small but unnerving painting Invocation that sets me on edge. There is something off-kilter about the figure dressed in inappropriate footwear and teetering on a rock. It feels like the image is borrowed from an out of focus photograph, almost like the scene actually happened. 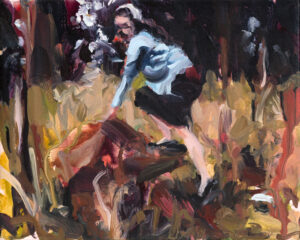 SR: Anyone who enjoys figurative painting, particularly portraiture and images of the natural world, will love this year’s exhibition. But there’s little in the way of formal abstract painting. Having said that, plenty of the works possess intriguing abstract qualities, including the grid of Mandy Payne’s Remnants of a Welfare State and the mass of organic forms in Compost by Michele Fletcher.

Overall, the experience of this year’s John Moores Painting Prize exhibition has made me rejoice at the sheer variety and diversity of artistic expression and perspective. It has renewed my enthusiasm for painting.

NC: I’m left reeling by the drama and intrigue. It’s spellbinding. I want to see the exhibition in the flesh, to appreciate how each piece of work is made. While in the virtual world we tend to see pictures, only in real life is it a painting.

By Sara Riccardi and Nancy Collatine

All 67 works in the John Moores Painting Prize were selected anonymously from nearly 3,000 submissions by a jury comprised of artists Michelle Williams, Gu Wenda, Hurvin Anderson and Alison Goldfrapp, alongside Jennifer Higgie of Frieze and Bow Down podcast.