Alas, Don Warrington. He’s one of the most distinguished actors of his age, with a long and remarkable theatre career. It must niggle him, surely, that an entire generation is still quick to identify him as ‘him out of Rising Damp‘.

Magisterial performances such as his King Lear here make it all the clearer that he deserves all the recognition and all the plaudits he’s due. After all, no-one ever pigeon-holed John Gielgud as ‘him out of Arthur‘.

For this new Manchester Royal Exchange production by Talawa, the UK’s leading black-led theatre company, director Michael Buffong presents a confident, unshowy staging with the emphasis on the text rather than gimmicky tricks. There are perhaps shades of Game of Thrones in the fur capes, buckle-strewn leather jerkins and flaming torches, but there’s a pleasing, focused simplicity to it as a whole. 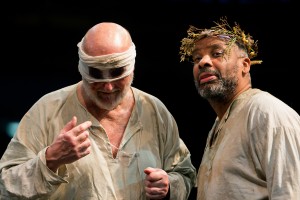 At the epicentre, of course, is Warrington’s Lear. He’s a capricious monarch who never strains to be liked, and is long since in the habit of being indulged. His rash actions will, of course, have dire consequences for the entire kingdom, which will remain out of kilter until this blight has been purged completely.

Warrington starts out with tiny, imperious gestures to convey Lear’s might, and as the piece goes on this gives way to wilder, lunatic actions as he conjures the fading embers of a once-formidable ruler. It’s a layered, thoughtful, fascinating performance which is unexpectedly low-key at times.

At over three and a half hours, King Lear is a marathon rather than a sprint, and possibly the staging of the second half, as assorted machinations play out and Lear’s world unravels, would benefit from a little added propulsion. But to its great credit Buffong’s well-crafted production never resorts to pummelling the audience and is entirely free from easy, unnecessary histrionics. It may not be destined to go down in theatre history, but nevertheless it’s a superlative, compelling take on one of the bard’s most highly esteemed works. 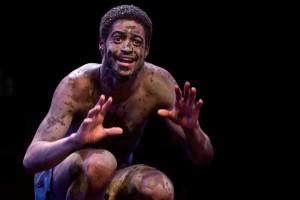 King Lear is at the Royal Exchange Theatre, Manchester May 7, 2016