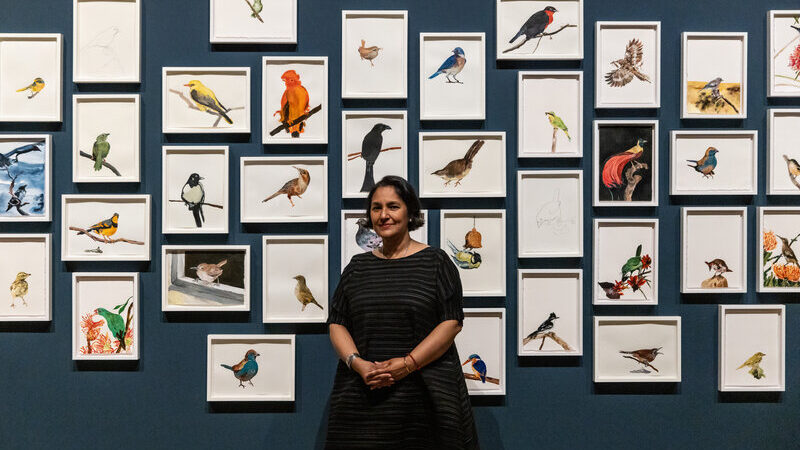 We are beginning to emerge from our 15-month hibernation. For many of us, our priority is being able to access the arts in a physical way, close up and in-person, as opposed to a screen.

BALTIC, the iconic former flour mill situated on the south bank of the River Tyne, is one of the most important centres for contemporary art globally and its latest exhibition, LUMEN, chimes perfectly with current societal shifts.

LUMEN is a major new solo exhibition which spans the extensive career of Bengal-born artist Sutapa Biswas. Biswas’s work first received acclaim in 1985 when she exhibited as part of The Thin Black Line at London’s Institute of Contemporary Arts. The artist has an encyclopaedic interest in the relationships between colonial histories and gender, race and class, and her work explores both personal and historical narratives. Eager to claim the label of a disrupter and challenger to established western art history, she acknowledges this was a challenge while studying Fine Art and Art History at the University of Leeds, because she describes herself at 21 as “a really good artist – and cute”.

Her 1985 work Housewives with Steak-knives, in which she re-imagined a housewife as Kali, the Goddess of Destruction, established Biswas as an influential member of the Black Arts Movement and with tectonic change occurring because of a Thatcher government, civil rights action and apartheid, a new moment for questioning the status quo through art had arrived. 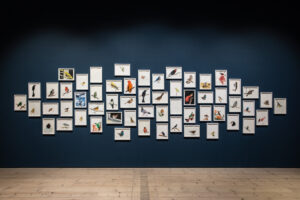 Lumen is a carefully curated selection of moving images, photographs and drawings that are connected by themes which have been at the heart of Biswas’s work for almost 40 years and include motherhood, migration, memory, loss and temporality. Her work invite us to consider time and space in relation to our own histories and relationships, while simultaneously highlighting unsettling truths around Empire and power.

With Remembrance of Things Past (2006), Biswas created a sensitive piece of film that recorded the thoughts of young people from Toronto. The film asks what they imagine the world expects from them, while observing them from a distance, a moment highlighting the often-difficult transition through adolescence. 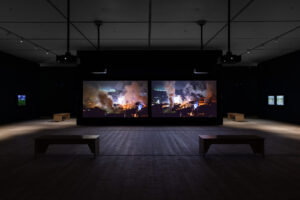 Synapse 1 (1987-92) is a series of hand-printed black and white photographs, taken during the artist’s first trip to India since leaving in 1966. Biswas uses her own naked body as a screen for projection. The title references the synaptic structures of the body’s nervous system responsible for transfer of information. The images were taken in locations that Biswas yearned to reconnect with in a bid to explore family history, belonging and desire.

Meanwhile, Time Flies is an ongoing project, which began in 2004, and is a beautifully arranged collection of bird drawings – some real, some imagined. The drawings reflect on a passage in Marcel Proust’s In Search of Lost Time. Biswas examines taxidermy and colonial art where birds were a familiar subject. The work also considers grief and loss and is a direct tribute to her own father, who clearly played a huge part in informing her view of the world and who she describes as being ‘birdlike’. 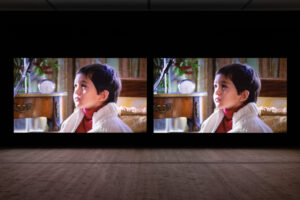 Light Rain (2014-21) is a two-screen installation shot in Beppu, Japan. Clouds of steam are captured rising from between buildings, that with the ambient sounds of traffic, provide a contradictory vision. The staggered timings of the neighbouring films accentuates the passing of time, together with providing a sharpened awareness of ongoing volcanic activity in the region.

In another dramatic two-screen installation, Birdsong (2004) captures a moment that was inspired by the artist’s son’s first words. Incredibly precious images also reference George Stubbs’s Shooting at Goodwood from 1759, which includes a black servant in yellow and scarlet livery, seemingly staring beyond the immediate activity, perhaps into an imagined future. 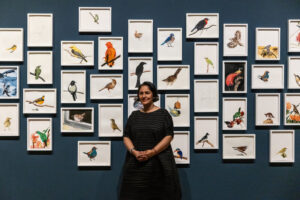 And Lumen (2021), which is Biswas’s most recent work, deploys monologue to tell (semi-fictional) stories of her mother and grandmother’s lives. Inspired by the family’s journey from Mumbai to Dover, stories of displacement and migration are interwoven with colonial histories from the British Raj. Shot on location in India and Bristol, the film references maritime histories very similar to those associated with the River Tyne.

The final element of the exhibition is Magnesium Bird (2004), a beautifully shot film that observes fantastical birds sculpted from magnesium ribbon ignite in the evocative setting of a walled garden at Harewood House, the Yorkshire seat of the Lascelles family. Filmed in a location created directly from the wealth garnered through Caribbean sugar plantations, the work is a meditation on the fleeting nature of our existence.

Lumen is showing at the Baltic Centre for Contemporary Art in Gateshead until 20 March, 2022. Tickets, which are free, can be booked at baltic.art/visit/planvisit.