I’m no foodie, as any of my friends will tell you. For me, pushing the culinary boat out means putting mayo on my fish fingers instead of ketchup. And so I ventured into the world of fine dining with a mixture of trepidation and curiosity.

Jean-Christophe Novelli is a multi-awarding-winning chef with a slew of Michelin stars under his hat and a myriad of TV appearances on his CV. His cookery books have sold millions and I’ll wager that his (mainly female) fan club has a fair few members.

Now he has joined forces with the team at Manchester’s Don Giovanni, a much-loved city centre restaurant. To mark the occasion, Novelli hosted an intimate evening where guests had the opportunity to sample JCN’s signature dishes as well as hear first-hand the thinking behind the menu.

On a chilly January evening, there was a delicious sense of anticipation, not least because we were treated to five courses, each with a different wine (selected by Joe James from Berkmann Wines).

Every table was adorned with sprigs of foliage, olives and focaccia, and the impact of decadent dining was immediate as soon as I sat down.

Toto, we’re not in Greggs anymore. 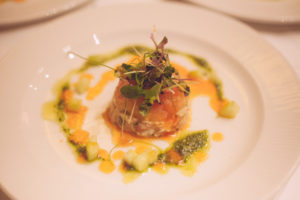 Before we got started, it became clear that JCN’s passion for food hasn’t waned after so many years in the kitchen. He described every dish prior to serving, and got the crowd onside by declaring Manchester to be a “foodie” city. During the course (no pun intended) of the evening he visited as many tables as possible, chatting to guests.

With only a packet of Branston Cheddars lining my stomach, I was ready to dive in. But, with five dishes ahead, I reminded myself that it’s a marathon not a sprint.

Portions are firmly in the ‘less is more’ category, and the intention is you take your time, savouring the flavours so that by the end of the night you’re full. Although, with a different wine to try each time, I was worried I’d be too hammered to notice.

So, to course number one, a palate-inspiring crab tartare with a red pepper and tomato reduction. It was fresh and flavoursome, and so moreish I had to re-train my taste buds to slow down. The art of taking time over dinner is clearly a long lost one. 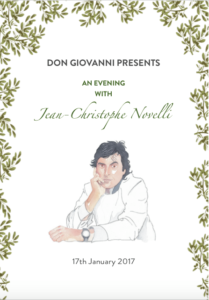 Course two was the only non-event. The seared scallop was more of a texture than a taste with the flavour coming solely from the sauce. The sweet potato and orange mash was gorgeous and presented in a seashell. 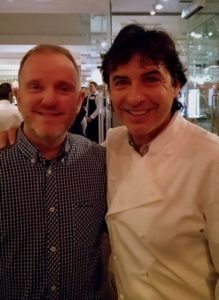 Next up was honey duck with a deep-fried risotto ball (did he know I was from Scotland?) followed by the main event, liquorice braised lamb, served on a bed of vegetables. Not much of a meat eater, I tucked in with apprehension, but both creations were beautiful and tender with the sauce complimenting the meat rather than overpowering it.

Finally, the pudding. Slow roasted pears infused with honey and cinnamon served with mascarpone and two mint chocolate sticks, accompanied by Moscato d’Asti, the best fizzy dessert wine I have ever tasted. They kept the best until last as it was delicious.

By this time three and a half hours had passed and, as it was a school night, I had to head off. But not before a few words with the chef who was genuinely excited when I told him how much I’d enjoyed his food.

Most of the dishes I sampled are on Don Giovanni’s a la carte menu, and another similar event is planned for the Spring. It isn’t cheap, but as a special treat, especially for the ‘foodie’ in your life, it’s wonderfully luxurious and unlike anything I had experienced before.

Suddenly, Bird’s Eye doesn’t have the same appeal to my previously dormant palate.