Jo Nesbø strides into a packed Manchester Town Hall Banqueting room looking as cool as the Johnny Cash of crime writing. As well he might – not only was he a bona-fide rock star before he started writing the Harry Hole books which have made him world famous, those same books sell, according to his publishers, at the rate of one every 23 seconds. Despite the fact that all things Scandi are very much in favour at the moment, that’s jaw-dropping stuff.

The Norwegian phenomenon is in town to talk about the latest one, Police, courtesy of the Manchester Literature Festival, for which fabulous festival this is a curtain raiser.

Interviewer Barry Forshaw, a noted expert on (and early adopter of) Scandinavian crime fiction, has it easy, with no disrespect. On stage, Nesbø is funny, interesting and, apparently at least, disarmingly open, except when it comes to plot spoilers for Police. He even admits to mistakes, acknowledging that he may have been “a bit seduced by sadism” in one of the more “violently explicit” books, The Leopard.

He seems sanguine about the fact that nobody outside Scandinavia can pronounce either his name or that of his flawed hero, and he’s not too put out about the disjointed order in which the books have been translated and released in this country. Police, the tenth novel in the sequence, is just published but it was preceded by The Bat, a tardy showing for the very first Hole novel, with Cockroaches, the second, following in a couple of months. “That’s why my publishers are called Random House,” he quips.

That first novel, in fact, was commissioned when Nesbø was at the height of his rock ’n’ roll fame. A publishing house contacted him, wanting a typical drugs, sex and rock ’n’ roll opus: “just another crap book by a rock ’n’ roller”, as Nesbø puts it. Instead, Nesbø used the five weeks he was on tour in Australia to write The Bat (or The Bat Man, as it was actually called in Norwegian) and sent it to them under a pseudonym. “I wanted to see whether I could write and I thought ‘what can I do in five weeks? I know, a crime novel’,” he remembers.

Harry, he discloses, was originally “a combination of an eccentric football coach in Norway and Batman”. Oh, did I mention that Nesbø was a professional footballer too, before injury put paid to that?

These days, though, he’s very definitely a full-time writer. “What a job for a grown man, just getting up every day to tell stories”, he marvels.

“I see myself as an entertainer. That’s the reader’s privilege and the writer’s job.” 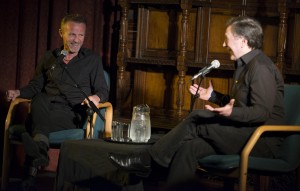 There may be a Martin Scorsese film of The Snowman sometime soon, we’re told. The great American director will at least be producing it, although anyone who’s ever been around the film world will recognize the wisdom of Nesbø ’s intent of “waiting until I know for sure that they are literally on the set filming before I believe it”.

He adds: “I always resisted letting anyone have the rights to film any of the Harry Hole books for film or television and I’d tell people who asked me about it ‘maybe one day, when Martin Scorsese calls me.’ Then he did…”

However that film turns out, even if Scorsese goes mad and casts Tom Cruise as the alcoholic and terribly flawed Hole, Nesbø’s firm belief is that “a film is not a version of the book, it’s something completely different. So they can’t possibly ‘spoil’ my book”.

And will there be more Harry Hole books, now he’s reached the tenth story?

“I’ve got a whole synopsis of Harry Hole’s life and stories,” he reveals. “For a while now it’s been my job not to destroy that. So, there are places we could follow Harry, yes.

“On the other hand, Police ends up at a place where we could quite easily leave Harry.

“I’ll see in another six months whether I want to hang out with this guy again.”