I have an issue with chopsticks. I just don’t get them. Over the years, my friends have attempted to teach me but, like figuring out a Rubik’s Cube, I find them impossible.

I’m the embarrassing friend who asks for cutlery, even to munch her noodles. You’d think Japanese food might strike fear into the heart of this chopstickly-challenged girl but, on the contrary, I love me some sashimi. Another thing I shamelessly love is a bit of healthy-eating. I follow Deliciously Ella on Instagram and wish I could spiralise my vegetables (if I could only be bothered), and my Pinterest is full of green smoothie recipes.  But, like Teflon, my clean-eating intentions never stick and I’ll find myself at the local chippy ordering chips, cheese and extra gravy.

This year I’ve made a conscious effort to try and keep to my clean(er) eating goals, and so, when I heard that popular Northern Quarter eatery, Cottonopolis, was promoting a detox menu, I wanted to check it out.

I didn’t know much about Cottonopolis, except that a friend swears by it as a great place to have a first date. Walking into the restaurant, I can see why it appeals to the romantics. It’s dimly – too dimly – lit and intimate, with lots of high-stools and tables for two. As my friend Ayesha and I slip into our seats, I have a nosey at the table to our right, and find that they’re having the kind of stilted chat that only happens on dates.

“Have you been here before?” our waiter enquires over the barked instructions coming from the open kitchen. I’m already happy. Like a kid in front of the telly, I am mesmerised by watching chefs at work. “We’re a Japanese tapas restaurant so I’d suggest choosing a few different items.” 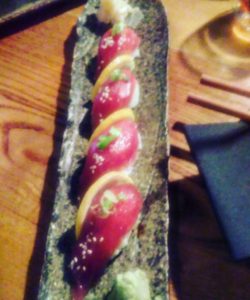 I explain that we’re here to try the Namas-Tea menu – I can’t decide if this is clever wordplay or a dreadful gimmick – but, now that I’ve seen them, I must also order the prawn crackers and avocado dip.

“Ah,” he says, pointing to a menu of delicious sounding fare. “This is all full of salt and sugar. Our detox menu is over the page.”

After perusing the full range of goods on offer, the detox menu looks considerably less thrilling.

Cottonopolis has teamed up with artisan tea blender Quintessential to create three bespoke menus around herbal teas: Detox, Cleanse and Revive. Each tea has been selected so they compliment the foods they are partnered with. I opt for the Yellow Tuna Nigiri from Detox (£9), which is paired with sencha makinohara, a Japanese green tea.

I ask for a different tea, a cardamom and ginger infusion. Ayesha picks black kingfish from Cleanse (£14), which comes with rooibos. After vetoing edamame beans, we order wakame salad (a sea vegetable) and pak choi from the small list of sides.

“Is that real wasabi?” Ayesha asks the waiter as he places our nigiri on the table, accompanied by a platter of tea and some fancy looking deep-fried prawn crackers. He looks like we’ve asked him to solve a riddle and goes on to explain that it is, but reals off a few more ingredients.

The waiter takes the tray and ambles off in the direction off the bar. Maybe it’s because we’re here midweek, but the staff seem to be less attentive  – almost bored – than I’ve experienced in other Northern Quarter restaurants.

Our tea looks exciting, like something you might find in a laboratory. There’s not a chintzy floral pot in sight, but rather clear, steam-filled vessels. Disappointingly, my ginger tea isn’t that great. I 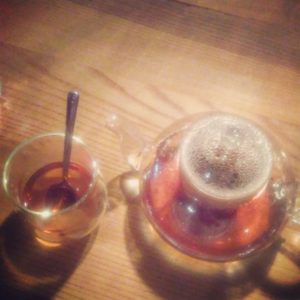 was expecting warm and uplifting, but it was weak, even after leaving it to stew. The rooibos, on the other hand, was refreshing and peppery.

For veggies and pescetarians, Cottonopolis has certainly got a lot to offer. The menu is understated. Slightly too understated. While I admire the simplicity, it doesn’t do their food much justice. After ordering, I wasn’t particularly looking forward to the meal ahead, and was pleasantly surprised by the standard of food served.

The blackfish, although spicy (there were tears at one point) – “There’s whole chilli flakes in it,” says Ayesha. “That’s why!” – is delicious, and, while I’d usually drown my nigiri in salty soy sauce, its tasty enough without.

For me, the stand-out dish is the pak choi. I have nothing against the vegetable, but sometimes it can be lacklustre. I could eat the whole dish from Cottonopolis by myself.

The thing about Cottonopolis is that while the food is great, there’s just something missing. For all its perfectly thought-out and impressive interior, it’s lacking in personality. Pitted against the likes of El Capo with its playful vibe or Common with its laid-back, artsy attitude, Cottonopolis gets a bit lost. Like it doesn’t know where it belongs.

“Actually,” Ayesha says, as we shrug on our coats. “That was enough food for the two of us.” 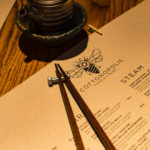 She’s right. I don’t feel hungry. I don’t feel particularly healthy, either, but that might have something to do with the cold I’m harbouring, or the prawn crackers I’ve just polished off.

Outside we spy some art work in the doorway, and do what feels natural – we pose for a selfie.

On the train home, sleepy from all the tea, I receive a text from Ayesha.

“On reflection, you can get nigiri, pak choi and rooibos tea for £8. That’s not bad going.”

If, like me, you’re a fan of a detox, or you’re guilt-ridden from festive over-indulgence, you could do worse than popping down to Cottonopolis for a healthy, tasty meal, that doesn’t cost the earth. Just make sure you take your glasses, it’s proper dark in there.