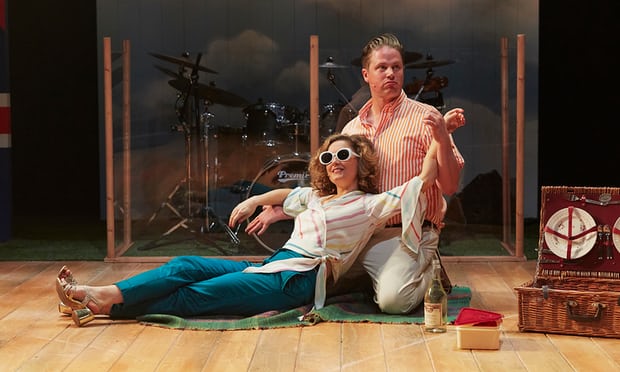 The theatre director and writer Bob Carlton said there are six good things in every show, no matter how ghastly it is.

They might be the programme, the coffee in the foyer, the lead character’s shoes, but there will be six good things. His critical nostrum has carried me through a number of forgettable nights, but I had no need of it here. There are so many good things in Bolton Octagon’s Summer Holiday that I had a thoroughly entertaining evening – and as a critic it’s always nice to know you won’t struggle to be kind. On the other hand, it does allow me to quibble. But the good things first.

Michael Peavoy in the Cliff Richard part is a revelation. I last saw his dark brooding form in The Tenant Of Wildfell Hall, a classic Yorkshireman –‘see all, hear all, say nowt’ etc. Who knew he could smile, let alone sing? Here he puts his saturnine good looks and excellent baritone to great effect. 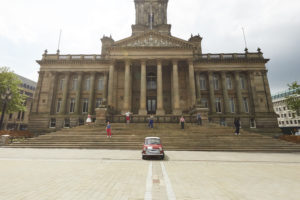 The acting, the singing and the playing are uniformly excellent. Apart from Peavoy there are nine other actors in the show. I apologise for not mentioning you all by name, but you were great. Note to the producers – please give a medal to Isobel Bates. Anyone who can say the line “I’m Mimsie” as often as she does without cracking up deserves one.

It’s a measure of how well performed the show is that The Young Ones duet had me thinking about Andrew Marvell’s To His Coy Mistress. That’s never happened before. And the producers – I assume it was a local decision – have replaced one of the girls in the Do Re Mi singing troupe with a man so that the inevitable couplings at the end produce a gay relationship. This was illegal when the film was made in 1963, and the tragic consequences have been vividly explored in Russell T Davies‘ TV dramatisation of the Thorpe affair, A Very English Scandal. With that resonating in my head I thought it was rather a lovely touch.

Amanda Stoodley’s design solves the problems of a show which takes you from the UK through France, Switzerland and Italy to Greece, including a trip in a boat full of goats, without stopping the show for a scene change. Marvellous. Her back wall of tall beach huts painted with European flags in the primary colour style of Peter Blake is perfectly period and creates and reflects the bright happy tone of the production.

My quibbles? The plot is really silly. But not quite as silly as The Magic Flute or Gotterdammerung. It does however turn, in large measure, on the Shakespearean trope of a girl dressing up as a boy to avoid discovery, and being taken as such by everyone else. In Shakespeare’s time doublets really helped this transformation, holding the chest in tightly. Loose t-shirts however, do not. I do object to being asked to suspend my disbelief over something that is very easily fixed. And it would make the moment of revelation even more believable. 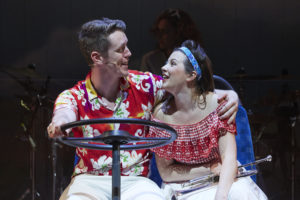 No choreographer is credited. I understand that in actor/musician shows the actors are generally so busy playing instruments that they don’t have time to dance, but there are a couple of opportunities for a show-stopper and they are missed. Not badly missed, but missed.

The audience were, generally, of an age to have seen the film when it came out, and they loved it. Bob Carlton was a director with a passion for popular theatre who practically invented the actor/musician musical and created Return To The Forbidden Planet. He died in January, but had he lived I think he would have loved it too.

Summer Holiday is on until June 23, 2018. For more information, click here