In a new series, Northern Soul’s Cathy Crabb talks to working class creative people, some already established, some emerging, and some setting their stall out to create more work for others. This week it’s Roni Ellis, Scott Berry and Libby Hall from Salford Arts Theatre.

Roni Ellis and Scott Berry have run Salford Arts Theatre, their own theatre, for ten years. They direct and act with their Salford Theatre Company, run the Young Performers Company, build the sets, work behind the bar, scrub the toilets and, when they sit down, do the admin. And sometimes they don’t even sit down to do that. I witnessed Berry behind the bar, on the phone to a customer, booking tickets on the laptop, with a half-made roll up in one hand and a dog in the other.

For Ellis there’s no question of not doing it. “I have been part of the creative and performing industry since I was 19, so for 27 years, and yes, it is hard work on many different levels but what you get from it is priceless. “Not just from a professional performance perspective, but also from seeing others fulfil their potential and grow. It is a very rewarding job, and most would love to be able to say that. Simple really, because I love it.”

I arrived at the theatre in time to watch the Young Performers older class’s rehearsal of Things We Say the Hours After Midnight, written by 16-year-old Libby Hall, who also performs in the play.

Hall’s play, which debuts July 26 to 27, is about how a child is suggestive to the strong opinions of adults. Two groups of friends, consisting of children and young people, attempt to piece together an event and find the culprit of a terrible crime. The dialogue is honest and natural as the characters struggle to make sense of something beyond their years. There’s a poem within the play that is so beautiful and speaks so starkly of how young women and girls feel right now that I was choked up listening to Hall recite it: 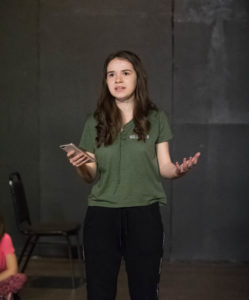 “Lately, there’s this feeling in me that won’t die. It devours my insides ‘til there’s not much meat left. Skin and bone girl with the world, rolling away from her feet…

…I try to sweet talk myself into believing I’m a decent human being, but I’m saturated. My blood-stream has swallowed up all the sugar it can hold, and it still does not make me sweet.”

As Ellis, Hall and I go to talk in the sunshine, we fight the tide of mini actors running into the theatre space for the younger Young Performers class. It’s a Saturday morning and, scorching as it is, the local kids would rather be here than in their paddling pools. Hall has come through the Young Performers Company, and mentors Ellis and Berry have known her since she was 10-years-old.

Hall wrote a monologue for last year’s Shelagh Delaney day and Ellis and Berry have been nurturing her through the process of writing this full-length play.

“I’m not a writer,” says Ellis. “But as a director I know what works on stage.”

They’ve taken Hall under their wing and you can tell they care about her and her future. The work they do with Hall and other local creatives shows their commitment to the residents, but Salford Arts is eclectic. The theatre serves Greater Manchester Fringe as well as visiting companies.

“We are a community theatre, yes,” says Ellis. “But we’re more than that.” 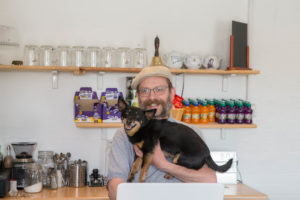 Recently, I came to watch BRASH‘s Shoefiti here, by Newcastle writer Bethan Kitchen. Kitchen and Ellis met at a women-in-theatre event and Ellis invited Kitchen to stage her debut at the theatre. Salford Arts has been a springboard for many local creatives of note and those who have gone on to highly sought-after acting jobs.

After finding that panto can be their bread and butter money, they are testing out a longer run and Hobson’s Choice, which starts on June 6, will have 12 performances – the longest run they have had so far. Berry is currently rehearsing as he is playing Hobson. As well as building the set. 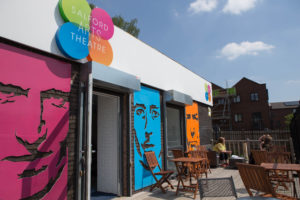