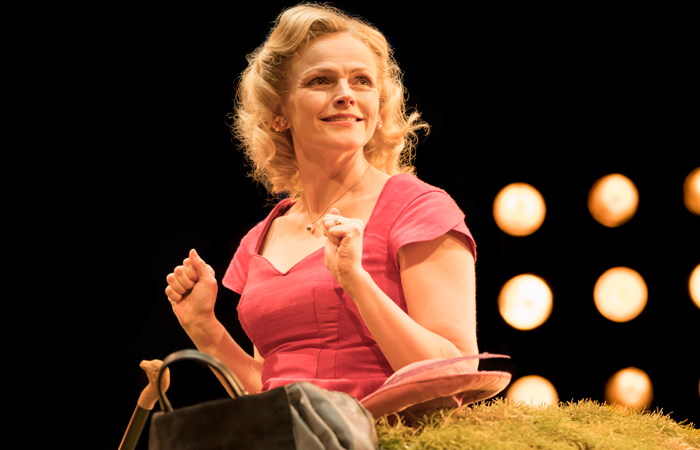 Regular visitors to Manchester’s Royal Exchange will be familiar with seeing productions in the round, but Happy Days offers a new twist: a show in a mound in the round. What’s more, it’s a mound with a Peake on top. Samuel Beckett’s 1961 play features a female character, Winnie, buried up to her waist in the earth as her husband Willie lounges about just out of sight, mainly dozing, only occasionally interjecting with a muttered word or two before crawling back into a hole in the ground.

Sure enough, Happy Days is a stark piece, though in comparison with Beckett’s more celebrated Waiting for Godot it’s like The Fast and the Furious. It’s less daunting and a shade more accessible than much of his work. Sarah Frankcom’s production here is suitably simple and highly effective, with a slowly revolving hillock complete with a scrappy little moat. The low-key sound design is supremely well-judged too. The only slightly jarring note is the use of screens in the second half which, while necessary in the circumstances, tend to draw the eye away from the performance (though we’re not exactly talking the scale of The Stones at Old Trafford here). 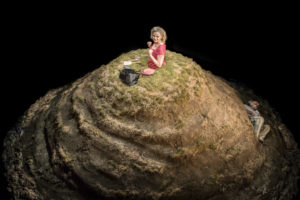 Needless to say, the whole piece stands or falls on the performances, and while David Crellin acquits himself admirably as Willie, it’s but a cameo role next to the garrulous Winnie, played by Maxine Peake. But some curious choices have been made. Peake is perhaps a little young to be playing a woman in the autumn of her years reflecting on days gone by. She delivers the role in a cut-glass post-war accent, not unlike Joyce Grenfell lampooning an old-school BBC continuity announcer, or a pre-dotage version of Julie Walters’ character from the ‘Two Soups’ sketch. Playing up Winnie’s ultra-mannered, highly civilised carapace makes a stark contrast to those moments when we see it threaten to shatter. Then again, playing the part down would allow it to breathe more. As for the accent, no-one would want to be reductive about an actor’s options, but a Bolton Winnie could have been something genuinely fresh and exciting.

All told, though, there’s no doubting the sheer conviction of Peake’s performance, and she’s often at her best with physical moments: those fleeting, haunted looks, buried hints of desperation and thousand yard stares. There are plenty of flashes of humour too, though they’re always at the service of Beckett’s favourite themes: the emptiness and loneliness of existence where no-one really listens to anyone else and routines, trivia, memories and materialism are simply hollow distractions from the fact that the ground is gradually swallowing us all up.

Turning all that into something watchable and engaging could be an uphill struggle, but Beckett managed it and for the most part this production pulls it off too. Rather too often though it feels like it’s anchored in the time in which the play was written rather than the time in which it’s being performed. After all, if Beckett was around today, he’d surely say that the human condition cannot change and we’re still all being swallowed up day by day. He was cheery like that. It’s an ironic title, you see. 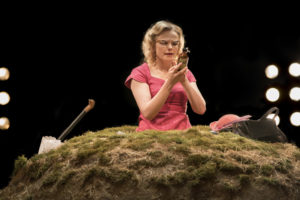 Happy Days is at the Royal Exchange, Manchester until June 23, 2018. For more information, click here.