It’s bloody hard to find Mackie Mayor. I used to think I knew Manchester’s Northern Quarter like the back of my hand, but, as my friend and I use the ever-trustworthy Google Maps and try to follow the blue dot, I realise that it’s an area of the city that constantly surprises me.

The Northern Quarter has had some negative press recently but, despite consistently going under the knife of regeneration, I reckon it emerges looking decent. However I do agree that the city’s facelifts are becoming more unsubtle, and a little too frequent, and run the risk of creating something infinitely more plastic than that woman who changed her face to look like a cat.

Situated on Swan Street, Mackie Mayor is a Grade II listed building and one of the last relics of Manchester’s old Smithfield Market. It’s a brilliant space and therefore surprising that it lay dormant for such a lengthy period. Now it has followed a similar model to the popular Altrincham Market with a central communal seating area surrounded by a host of tasty food and drink outlets, and a mezzanine seating area above.

There was a huge buzz surrounding Mackie Mayor when it initially opened and it’s not hard to see why people were so interested. It’s a terrific addition to the city’s thriving food and drink scene, and offers something a little bit different.

Manchester has witnessed a resurgence in food-hall-type-places of late, including food fair GRUB and B.EAT Street. Mackie Mayor’s appeal stems from the fact that it offers something more casual and communal (you can go with a group of mates, you don’t have to book a table, you can opt for food or drinks, or both) – while still serving up great food. And there’s plenty of choice from the likes of wood fired pizzeria Honest Crust, steakhouse Tender Cow and its fish side-line Fin, bakery Katie’s Cakes and Asian eatery Bao House.

I’d previously been for evening drinks (and sampled one too many of the tasty craft beers on offer from Blackjack brewery) where the atmosphere can only be described as ‘after work’ – laidback, casual and bustling (it’s sometimes tough to get a seat but that’s testament to how popular the joint is at the weekend) – but I’ve never sampled the grub. 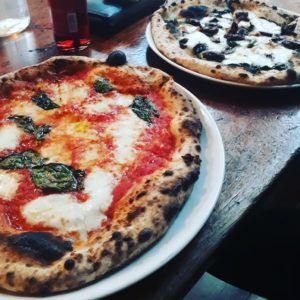 Pizza is my ultimate comfort food. Growing up, it was always a treat and even now, as a 30-something who likes to eat as healthily as possible, it’s still my go-to indulgence. There’s something about melted cheese and bread that I can’t resist. So when my friend and I decided to meet up for a chinwag – and so I could retrieve my make-up bag which I’d stupidly left at her house – Honest Crust was at the top of my list of eateries.

This time around (2pm on a weekday) we have no problem finding a table although, much to our dismay, the mezzanine is closed off. We clock our number (it’s table service and there are handy wooden spoons which serve as markers) and immediately head to check out the array of pizzas. Both veggies, we opt for margarita (£8.50) and the more interesting broccoli and smoked mozzarella (£11.50).

The service is fast (but, again, it’s mid-week when most people are snacking on a cheese butty at their desk), but the food is fresh and hot (thanks to my pizza greed, I burn my mouth on hot cheese). Margarita pizzas run the risk of being bland and boring, a bit of grated cheese on a too-heavy base, but I reckon it’s easily Honest Crust’s best offering from the vegetarian options. The broccoli and smoked mozzarella is tasty but there’s something about the tomato, gooey-cheese and fresh basil of the margarita that makes it so scoffable. It’s without a doubt the best pizza I’ve tasted in the city centre. 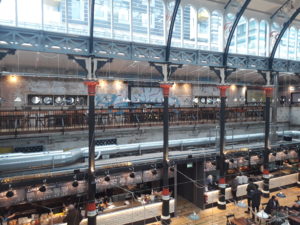 We wash it all down with soft drinks (daytime drinking is a bad idea, I’d be asleep on the train back to Stockport). We opt for bottled lemonade– I choose lemon and my friend picks cherry – and they’re a welcome change from pints of flat sugary pop – perfect for those of you climbing the walls during Dry January.

The thing I like most about Mackie Mayor, besides the delicious food and the stunning building, is how casual it is. I don’t mind sitting there, sans make-up and looking like a Victorian child ghost, because it’s not a dressy affair. You could head out in jeans and trainers or rock more glam attire and no-one would bat an eyelid. My only issue is that the food is a tad pricier than other Northern Quarter eateries.

So, if you’re interested in preserving Manchester’s history, Mackie Mayor is a gem of a building – and the scran isn’t half bad either.