It’s 1980. A small boy is attending a birthday party in a room above the Stonemasons pub in Timperley village. One of his classmates is the publican’s son. He doesn’t win any of the party games but he gets to go home with a Skol tea towel anyway.

It’s 1990. The same boy, now a young man, waits outside the Stonemasons for the 108 bus to Hulme. He and his mate Rob Dempsey are attending college there and, on the journey, they will discuss life, love and World of Twist.

It’s 2018. The same man has come to the Stonemasons to review the new food menu in the wake of a major new refurb.

In the interests of full disclosure, this writer and ‘The Stonies’ go way back. To be frank, it hadn’t changed a great deal in the intervening years since 1980. On a recent visit a few months ago the place was virtually deserted, and it badly needed some TLC. That’s now come to pass courtesy of the enterprising Pilling & Pride company, following on from its smaller-scale transformation of The Dog and Partridge in Didsbury village.

There is an elephant in the room here, and it’s an elephant with the word ‘gentrification’ painted on its side. The Stonemasons might have been threadbare for years but nevertheless it was there for the local community, from the nearby Broomwood estate to the more moneyed punters further away. Is giving a pub a fancy whistle-and-bells facelift and putting the prices up always necessarily the right thing to do? Pubs are generally thin on the ground around these parts anyway, and the demographic of Timperley has been shifting in recent years. In trying to cover all these assorted bases, Pilling & Pride has got its work cut out. 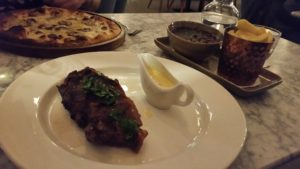 To be fair, most niggling reservations were allayed by the food itself, which was really very good. We’re not quite talking a spectacular kitchen revolution here, but it’s certainly superior pub fare, done with evident skill and some flair. Even the starters made a big impression: sautéed chicken livers on crisp, light sourdough with marsala and cream were a delicious stew of flavours while the beetroot, clementine and goat’s cheese salad made for a fresh and appetising combination.

They would seem hard to beat, but the mains were impressive too. The Stonemasons is offering a range of steadfast family friendly favourites, with steak and pizzas a speciality. There’s a wood-fired pizza oven out the back, as well as a ginormous beer garden, so it’ll be interesting to see how they make use of that come summertime. The truffle and parmesan pizza had a wonderfully textured, chewy base and it’s plain to see that this is an area they’ll do well in. The same goes for the steak. The sirloin was rich and exceedingly flavoursome, complete with a choice of two sides. Out of curiosity as well as sheer greed, we went for the Paddy’s Peas, more rightly a companion to the Paddy’s Pies elsewhere on the menu. This was quite the experience. A concoction of meat stock, salt beef, peas and pickled onions, it was more like a meal than a side dish and a spoon was required to finish it. That’s in no way a complaint. 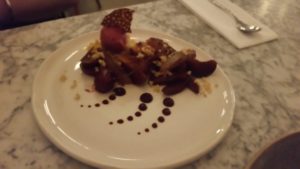 The desserts were likewise trusty perennials given a bit of a twist. The winter fruit medley was perhaps the only disappointment of the visit. Not unlike a deconstructed crumble, it was missing some of the promised elements, with no sign of mango and barely a cameo appearance from a kiwi fruit. Nevertheless, what was there was good, and the presentation was splendid. The sticky black treacle pudding was much more of a winner, surprisingly delicate and creamy rather than overpoweringly sweet.

A hearty thumbs-up for the food, then. The look of the interior itself is tasteful and minimal and the décor has a neutral off-white and racing green colour scheme. Certainly, it’s been totally transformed from the tatty boozer of old. The bar now offers a vastly improved range of beer and cider. In some ways the place is reminiscent of The Metropolitan in Didsbury, and it wouldn’t do Timperley any harm to have its own equivalent. Whether punters will travel here from further afield, though, remains to be seen. 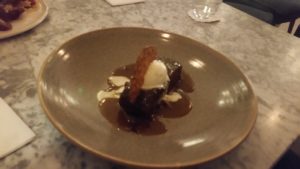 There is some room for improvement. The service was unfailingly helpful and attentive, but dishes were a tad sluggish to come through and there was the odd longueur between courses. The acoustics aren’t necessarily great for a quiet chat, either. That said, it’s early days and for now everything from the menu to the layout is in a state of trial-and-error flux.

Ultimately, the Stonemasons is a big old space and there is room here to try and please all comers, from lifelong regulars who fancy checking it out for a quick drink to newcomers drawn in by the fresh start and the food. Certainly, it was good and busy during our visit. It’ll be a fine balancing act, but this is a very strong start which deserves to do well. Many locals will have their own Stonemasons memories but it’s to be hoped that it’s an opportunity for fresh memories to be forged here too.

By the way, I’ve still got that Skol tea towel.