You could make a case, and I’m going to make it, that short stories are like pop songs, compressing time and emotional truth into self-contained bubbles that lift one out of oneself by getting under one’s skin.

Birkbeck University has been publishing its annual label compilation since 2004. Its imprint draws upon the university’s foundation as an educational establishment for the skilled artisans of the working class. But, in the past, The Mechanics’ Institute Review has functioned as a showcase for students of its MA Creative Writing course, albeit one augmented by star turns from more recognisable guest artistes, such as the late David Foster Wallace. Last year, however – supported by a grant from Arts Council England – submissions were opened up to less well-established writers beyond its Oyster Card precincts. 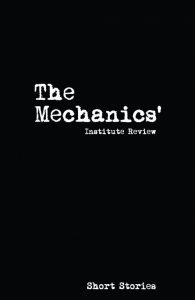 Tonight’s line-up, enclaved in the reposeful auditorium of the Burgess Foundation, in Manchester, barely a footfall away from the Friday night excesses of Oxford Road, reflects this, drawing mainly from the 14th anthology, the latest edition. As with the evening chart rundowns of decades past, comparisons are unavoidable, just as judgements are inevitably in the ear of the listener, informed by their own predilections.

Style and subject vary, from the visceral insistence of Ruth Ivo’s reconstruction of night becoming day in a Berlin Techno club to Manchester-based Reshma Ruia’s imagined America, evoked in tastes, both gustatory and less literal. Nevertheless, common concerns emerge across the evening, most particularly an engagement with cultures less bound to these isles, be they Leila Segal’s vividly other Cuba, suggested in its flora and insecta, or Sarah Hegarty’s pre-Tiananmen Beijing, in which the occidental is viewed as the exotic.

Of the entries in this genre, the most effective for me was Dane Buckley’s The Last Empress of Calcutta; an affectionate ventriloquism of his Indian grandmother in the last days before her emigration to ‘Blighty’, whose every cadence – aided in no small part by a warm and engaging performance – rang with fondness and comedic truth. A definite hit.

It was, however, the tales that were told at the conclusion of each of the event’s more commercial television-like two halves that left the most lasting impressions, both in their way exceptions (the first, being published in M.I.R. 11, the second being the composition of the current edition’s guest star), and each in their way exceptional.

Concluding part one was the final act of The Authenticity Of Ash Creek, James Mitchell’s black-mirrored satire on an adventure holiday descending vertiginously into one requiring the prefix ‘mis’. The excerpt was delivered from the imperfect heart of the self-ironising protagonist, so that the comfort of laughing at her from a safe vantage point was never quite in reach, with the effect that – for all the comic verve that preceded – the end of her story was unexpectedly affecting.

On a different week, it might have reached number one, but this evening that honour is accorded – exactly as on Top Of The Pops – to the final performer to take to the stage. In contrast to Mitchell, Jenn Ashworth gave the audience only the opening bars of Mrs. Mackie Waits, but in those verses the four-time novelist and once-prison librarian eased us into the driver’s seat of the titular former school teacher vacillating in front of prison gates, apparently awaiting the release of a former pupil, peeling layers of time away to reveal…

Well, for that, you’ll need to read the book. After all, isn’t that the point of both pop song and short story, to leave one with the itch for more?