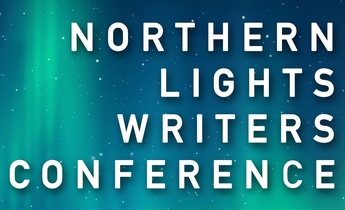 “I’m just surprised they’re holding something like this here,” whispers one of my fellow conference-goers as we take our seats in the Robert Bolt Theatre for this year’s Northern Lights Writers’ Conference.

“What, Sale?” I ask, thinking that, yeah, it’s a bit odd that bestselling author Joanne Harris is giving her keynote speech metres away from the Slug & Lettuce where I’ve been a bit tiddly on occasion.

“It just seems so unlikely,” she adds.

I suppose she has a point. When I think of the epicentre of writing and creativity in the North of England, Sale doesn’t immediately spring to mind. Salford, yes. Manchester (a UNESCO City of Literature), most definitely, Haworth, Heptonstall, for sure, but Sale? But then, why not? Great writing and creativity can come from anywhere, and Waterside Arts Centre is no stranger to producing good work, not to mention the fact that writers from across the North are churning out brilliant literature and creative projects at a rate of knots.

Waterside occupies the site of the old Sale Civic Theatre as well as part of the former Trafford Council Town Hall, and, although it does have that modern feel, it’s got a bit of character, too. It’s also not a huge space which is perfect for an event like the NLWC because it’s supposed to feel intimate and immersive.

Back for a fifth year, with a day-long programme full of interesting panel discussions and one-on-one drop in sessions, NLWC is great for any writer whether already published or toying with an idea. This year’s keynote speaker, Barnsley-born Joanne Harris, has written something close to 18 novels, two short story collections, a Dr Who novella, guest episodes for the game Zombies, Run and three cookbooks. She says: “If you’ve written something, then you’re a writer.” 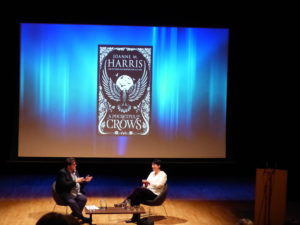 I’ve never read any of Harris’s work (I was put off by the film based on her book, Chocolat) but after her warm, funny and in-depth account of her varied writing challenges and experiences, I’ll be remedying this right away. With wonderful asides like “if I was a musician, I’d rather be a Bowie than a Status Quo”, it’s hard not to like Harris. Subjects range from the importance of not assuming everything will work out and the pleasure of the unknown, to posting sweaty pics on Instagram and her fondness for Twitter. “Nobody asks you to follow boring people on Twitter,” she says. “Sometimes I feel like you get the Twitter you deserve.”

The event is organised by Waterside’s sister organisation Creative Industries Trafford, with support from Trafford Council, and – despite the tram from Piccadilly breaking down twice – I don’t begrudge the journey out of the city centre. It’s well-organised yet laid-back. I’m not ushered about as though on a school trip; the onus is on the individual to get the most out of the conference.

The programme is impressive including spoken world panels, drop-in workshops with poets and creative non-fiction writers, practical advice on how to approach an agent and topical discussions about the importance of new platforms for writers and a stark look into what a writer might expect to be paid in the current climate. Spoiler alert: it’s not much. 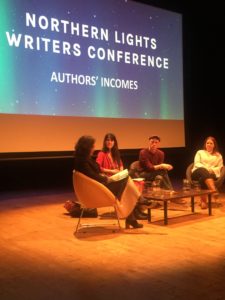 I attended NLWC because I was intrigued and, as Literary Editor of Northern Soul, I thought the panel discussions might be insightful. For me, the most interesting chat was about new platforms for writers, chaired by media producer and lecturer Ric Michael, and included discussion about the rise of digitalised literature and augmented reality. “The more people that adopt digital/immersive platforms, the more it will innovate,” says Richard Evans, writer and director of the Aeon Project, and I whole-heartedly agree. New platforms should be enticing new writers, not scaring them away.

I also enjoyed listening to Manchester-based literary agent Sinead Heneghan (during a discussion with Kate Feld, Richard V. Hirst and Arts Council England North’s Alison Boyle) shining a spotlight on access being a “fundamental problem” within publishing. There was also a huge nod to the work, and rise, of independent publishing which is something I am keen to see flourish in the North, with Harris suggesting that big publishers have a “blind spot” when it comes to knowing what people want from the industry.

What I wasn’t expecting (not to sound uber cheesy) was to come away feeling, well, inspired. Harris was a rousing speaker and great fun, and you could see people scribbling away in their notebooks as she reeled off excellent advice (“I’m a big fan of failure. If you haven’t failed at something, you haven’t tried hard enough.”)

And I found the inclusion of drop-in segments most valuable. “Are you still working on your book?” is a question I often hear from friends, and my answer is always something like “I’m not sure I should write it” or “I really don’t think I have the time”. After rambling about my work-in-constant-progress to creative non-fiction writer and managing editor of The Real Story, Adam Farrer, and getting a bit of well-needed advice, I felt buoyed into putting pen to paper again – or fingers to keyboard, I suppose, but that just sounds weird. 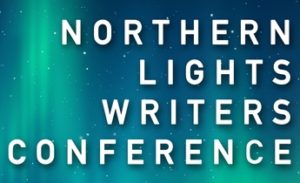 When the afternoon sessions are over, there’s a chance to meet the writers and buy some books. I hover around at the back for a bit, watching Harris engage with an extremely happy audience, but slip out quick-sharpish before temptation takes over. Book Tower does not need any other books. One more and I’m certain it will fall and crush the dog.

If you’re a writer, I would highly recommend checking out next year’s conference (and packing a butty or two, it’s a long day). But if you’re feeling inspired and can’t wait that long, there are a number workshops hosted by Creative Industries Trafford and Waterside that might sate your creative appetite.