As the interactive virtual tour came to an end, our digital guide remarked that they hoped visitors to Elizabeth Gaskell’s House would receive as authentic an experience as “it would have been in Elizabeth’s lifetime”. The staff and volunteers have certainly achieved this goal, and I say this only having experienced the online version.

Gaskell, one of the 19th century’s literary icons, spent the last 15 years of her life in this house, situated at 84 Plymouth Grove in Manchester. A spectacular Grade II* listed Regency-style villa, she rented the property with her husband, the Unitarian minister William Gaskell. After the Gaskells’ tenancy, the property became a private house before later being used as accommodation for international students at the University of Manchester. In 2004, the house was purchased by the Manchester Historic Buildings Trust, which refurbished the building to its former Victorian glory and opened it to the public as Elizabeth Gaskell’s House.

During the COVID-19 pandemic’s various lockdowns, museums and heritage sites were forced to close their doors and head online. As part of a rich digital programme, the team at Elizabeth Gaskell’s House delivered a series of virtual tours, and I was lucky enough to join one of them. Now, these were not simply public Zoom talks accompanied by a few photographs. Instead, the tour included 360° images of each of the rooms with the option to zoom into specific areas. It was an immersive experience which made the most of the technology available and brought the space to life.

When I joined the virtual tour, there was something it did particularly well: portraying a vivid picture of Gaskell, not just as an influential writer but also the context in which she lived and worked. As we (virtually) wandered around the rooms, we were joined by many of these characters, including John Ruskin, Annie Swynnerton, Charlotte Brontë and Charles Dickens.

We saw Gaskell’s wedding veil located in a cabinet in the Morning Room while, in the spectacular bookcase in William’s study, we found the almost complete collection of Dickens’ publication, Household Words, where some of Gaskell’s writings were published. According to the guide, the room that best represents Gaskell’s own life is probably the dining room. It’s a wonderful bright, large space, which houses the family dining table, dressed for lunch, at one end of the room and a round writing table at the other where the last page of Gaskell’s final book, Wives and Daughters, is displayed. The divided room represents a divided life.

The entrance Hallway, Morning Room, William’s Study, Drawing Room and Dining Room all show varying aspects of family life in the house and the rooms have all been furnished with great historical accuracy. Indeed, numerous quotes from Gaskell’s diaries and letters animate the tour, which provides a great deal of detail when imagining Gaskell, her husband, their four daughters and the many visitors who once inhabited the space. These documents have also been used as a source of information regarding the original aesthetic and decor of the house. As the guide said, the authenticity of the experience is at the heart of the work of the Manchester Historic Buildings Trust.

Thankfully, it is now possible to physically step into Elizabeth Gaskell’s House. What are you waiting for? 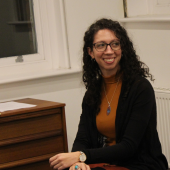 Review: All or Nothing, Storyhouse, Chester

Art Review: How to break the humdrum – Obstructions at Castlefield Gallery, Manchester