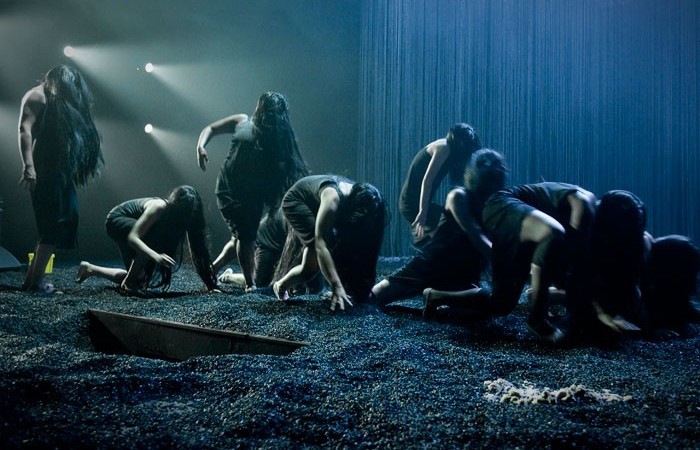 Staging any of the theatre’s most enduring classics is an exercise fraught with danger, and few works are quite like The Oresteia. But in this violent and visionary re-telling of Aeschylus’s great masterpiece, HOME in Manchester has certainly lived up to the challenge.

And quite a challenge that is for, in among the all the genocide, filicide and matricide, the great warrior playwright of ancient Athens still found time to instruct his audience on the pointless perpetuation of retaliatory violence and the birth of jurisprudence in the west.

Let’s face it though, back in 458 BC it was, in all likelihood, all the killing that earned Aeschylus the commission in the first place, and modern audiences are just are bloodthirsty as their ancient Greek counterparts. And if Aeschylus and director Blanche McIntyre are able to smuggle across more than a few eternal truths about the human condition, so much the better.

As to the plot, well…no, you don’t need to read about that in any great detail here, suffice to say the story concerns the descent of the House of Atreus into revenge, insanity and murder, all carried out on a stage comprising a thick carpet of ash and cinders – the remains of the fallen soldiers of Greece and the slaughtered citizens of Troy. Make no mistake this is dark material and so very, very Greek.

The setting may be ancient but the characters are clothed in modern costumes, and the dialogue, taken from the Ted Hughes translation and added to by McIntyre, is an adept mixture of Aeschylus’s timeless prose and more contemporary idioms.

No prior knowledge of Greek history and mythology is required to enjoy the play as the presence of a narration, delivered by separate male and female choirs (a feature retained from ancient Greek theatre in which this narration would actually have been sung), tells the audience exactly what they need to know. In this respect it is refreshing to see a director have the guts to ignore that achingly tired shibboleth of modern culture, ‘show don’t tell’.

In fact, much about the direction of this reinterpretation is praiseworthy. In her use of the choirs, McIntyre injects a voice into proceedings that in its collective cadence reflects modern sensibilities, reiterating timeless public fears and the kinds of communal weaknesses that have infected every society, every polity.

As ash falls gently from the dark imagined sky, with the silent menace of radioactive fallout, the body count on stage begins to rise. Murderer number one is played with a controlled, cold yet scintillating performance by Lyndsey Marshall as Queen Clytemnestra; cold that is until she is warmed by the blood of her victims whereupon Marshall ignites and Clytemnestra explodes and then implodes with an equally terrifying intensity.

A growing intensity was the hallmark of Ronke Adekoluejo’s excellent performance as the leader of the female chorus and her transformation into a jittering, howling Furie was absolutely compelling, as were the Furies’ themselves, a third chorus of infernal female goddesses, dressed in black shifts with long black wigs obscuring their faces, who jerked and contorted themselves into the most disturbing positions with alarming alacrity. 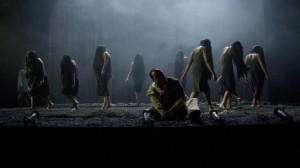 Equally impressive was Hedydd Dylan’s remarkable ability to slip seamlessly from one character to another and her performance as the luckless Cassandra was one of the highlights of the piece.

But what would Aeschylus have made of it all? That of course we can never know. But there is one aspect of this imaginative, exciting interpretation that I feel sure the great Greek would applaud. The characters in this Oresteia do bad things, which sometimes they blame on fortune, sometimes on expediency and sometimes on the Gods. Yet at no point do they attempt to deny the moral weight of their deeds; at no point do they attempt to deny that the things they have done are bad. 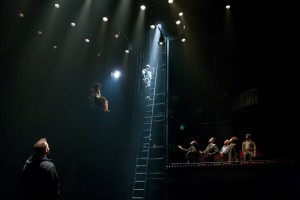