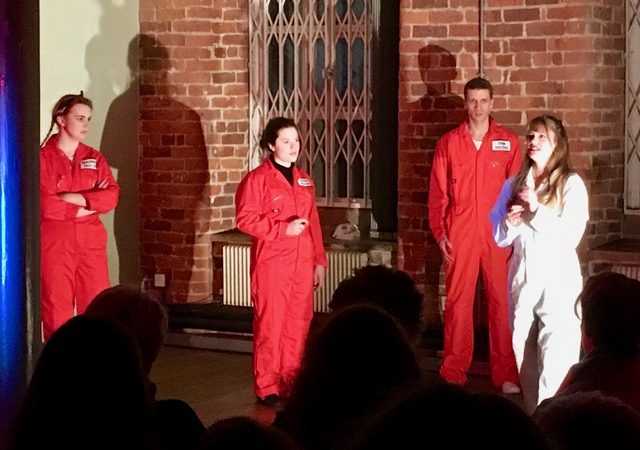 I don’t suppose it’s ever occurred to you but putting on a play is a bit like selling fish. Yes, we’ve all seen some stinkers in our time, but that’s not my point. Theatre is retail. You open your shop in town for however long you can afford the rent and hope someone buys a ticket. But if you’re selling shoes, your stock will keep for another day. With a play, once the performance is over it must be paid for – even if nobody came. Like fish, theatre goes off quickly.

Maureen O’Neill got it into her head that Stockport needed a fringe theatre so she started one. I think O’Neill is right, Stockport needs all the cultural life it can get. There’s The Plaza Theatre, but the main attraction is the legendary afternoon tea, and also Where The Light Gets In, a restaurant started by local boy Sam Buckley after he’d worked for Simon Rogan at Cumbria’s L’Enclume. The Guardian’s Marina O’Loughlin said she’d cross continents to eat there, but you’d have to find it first (it’s stuck away in the back streets). Good though, very good. But that’s about it for Stockport. Except for the Hat Works: Museum of Hatting. 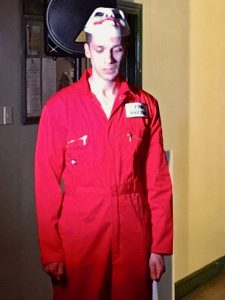 Hatting was Stockport’s major industry until the 1930s. The last hatting mill was turned into a museum, and that’s where O’Neill decided to put on a show. Now, the Education Room at the Hat Museum has several pillars, but so does Oldham Coliseum. Nevertheless, without much headroom for lighting it’s a challenging space. And once O’Neill had booked the room, the show she’d planned to do was withdrawn for a tour, so she had to find another in a hurry. I’m amazed more theatre producers don’t have nervous breakdowns.

My old mucker Bob Carlton of Forbidden Planet fame used to say that there were six good things in any show. It might be the programme, the coffee or the chorus girls’ shoes, but there were always six good things. It’s a useful idea, and I had no trouble finding six good things in O’Neill’s production. Unfortunately the play wasn’t one of them. The acting was excellent and Antonia Whitehead as Mo stood out among a strong cast – a bundle of nervous energy and misapprehension – and they were well directed by Leni Murphy who made inventive use of a difficult space. But I thought Mike Heath’s script lacked shape.

To be fair to the play, I laughed a fair bit and I was entertained for a good two hours. But to what purpose? The play begins in what appears to be a High Street food shop which has been taken over by a faceless conglomerate. It ends in a futuristic world where there may or may not be a mysterious disease caught through eye contact, and everyone is controlled by their phones. There are themes here, but they’re not developed into a coherent narrative.

I  heard someone talking on Radio 4 – so it must be true – about the hell that is working for Amazon, and the play has elements of that. But, charming as the performances are, I didn’t care about anyone because I had no real idea who they were. 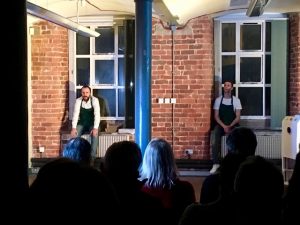 Perhaps I’m being picky. On the night in question, the house was nearly full, and I understand the show has pretty much sold out so the word of mouth was good. That can only be good news for Stockport as it will encourage O’Neill and others to start building something valuable. I know she has a meeting with a senior councillor from Stockport Council (now run by Labour after 40 years of the Lib Dems, who did nothing for its cultural appeal) who is keen to develop cultural opportunities in the borough. It’s about time.

Maureen O’Neill, I take my hat off to you.