Caroline Clegg has done it before. Although she enjoys a career in opera and music, she returns to Manchester’s Heaton Park every year and mounts a summer show.

An open air show in a park is a risky business, especially so for Clegg because she relies on box office income to fund a great deal of the production costs. So it had better be good. Fortunately, it is.

This year’s show from Feelgood Theatre is Romeo & Juliet. Unlike Shakespeare’s other tragedies, R&J starts off like a comedy, young love triumphing over social disapproval, only tipping into the dark with the death of the charming, swaggering Mercutio, played here with bags of charm and swagger by Joseph Jordan. That light start suits the mood of the early evening, and the play and the night darken together.

The music in Shakespeare’s plays was often popular music of the time, guaranteeing an emotional response from the audience. By an ingenious time-slip at the start, Clegg manages to persuade us that 15th century Veronese knew the work of Coldplay, and we respond appropriately. As you would expect from an opera director, the music is well done. It doesn’t hurt that Juliet is played by Nia Coleman who is training to be an opera singer. She can act too, and the love at first sight between her and Romeo, a laddish, besotted Ned Cooper, is completely believable.

As well as the music, Clegg has, in a nod to the Elizabethan masque, added a couple of dancers to the show. This is slightly baffling at first but they come into their own at the end. 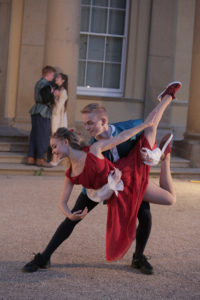 The plot is driven by the enmity between the families of the Montagues and the Capulets, and it’s that dark force that brings about the tragedy. They do seem to be intent on murdering each other, but then they’re Italian, or were, as this production is located firmly in Mancunia, where gang fights are equally believable. And boy do they fight, with sharp-looking swords and daggers, and rather close up.

There are other stand-out moments: the Capulet masked ball in front of the 18th century Heaton Hall; the balcony scene with Juliet on the roof; Lord Capulet’s terrifying attack on Juliet when he discovers she won’t do his bidding; and the whole of the final 20 minutes.

The production uses the park and the hall extremely well, and each location seems entirely appropriate. Unlike other park shows, it eschews vocal amplification, which is only very occasionally a problem, but the verse speaking is a little patchy. The beginning in particular could be clearer as we all try to get our ears tuned to Shakespearean language, and I felt that some of the cast had not quite got the measure of the longer speeches. But I quibble. If the language isn’t always clear, the story and the emotional journey certainly are. I came away thoroughly entertained.

Clegg used to play in this park as a child, and that goes some way to explain her obvious passion to bring the landscape to life and to show off the hall. But she thinks she can do more so she’ll be back again next year for another go, and so will I.

Romeo & Juliet is at Heaton Park until August 12, 2018. For more information, click here.