Henry Normal is a writer, poet, TV and film producer, well-known for his collaborations with Steve Coogan, Caroline Aherne and many others. Here he chats to Paul Neads, editor of Manchester-based Flapjack Press, a publishing firm specialising in poetry and poetry events.

Henry Normal: When did you first have an interest in poetry?

Paul Neads: Lord knows. Being forced to read Siegfried Sassoon at school didn’t manage to put me off completely, but it was most likely copying out song lyrics as a teenager that hooked me and slowly becoming more socially and politically aware.

I was lucky to be brought up with plenty of books around the house so there was always something poetic somewhere to dip into from a young age, even if they were children’s rhymes, but poetry didn’t really appeal much as I grew up – the dryness of set school texts never helped. Nowadays there are actually living poets on syllabuses, but back in the 70s there seemed a time-range where anyone who existed after the invention of the typewriter was a flash-in-the-pan modernist who had nothing to say.

The ‘now’ didn’t matter. Everything was retrospect. Learn from your elders not embrace the present, certainly don’t try to change it, who do you think you are? And anything that was under a century old, unless written in a trench, was not poetry. Unless it was Betjeman, cos he’d been on talk shows and been to Oxford, so that was to be applauded. Yeah, right. Larkin was probably somewhere on a curriculum, but only because everyone thought he was already dead. I may well be mis-remembering this, tinged now with grumpy middle-age, as I was never the best at paying attention. Brian Patten could have been my form teacher and I’d miss it.

HN: How did Flapjack Press come about?

PN: Born out of the world of zines, really. Back in the day when you’d type stuff and go to the library to use their photocopier, then one day get to own a PC, a printer and a long-armed stapler, and so on. Not long after the turn of the century I realised there weren’t many poetry magazines around Manchester any more. Brando’s Hat and The Affectionate Punch had just stopped and Rain Dog was about the only one, so I started a home-made poetry zine called The Ugly Tree (because it wasn’t printed on recycled paper), which various places around Manchester stocked – Afflecks, Whitworth Art Gallery, Cornerhouse to recall a few – and it sold reasonably well and got quite a good following and positive reviews in CityLife. Once print-on-demand companies started becoming more commonplace it got a bit glossier and perfect bound and that opened the door to focusing on single author collections and setting up Flapjack Press. 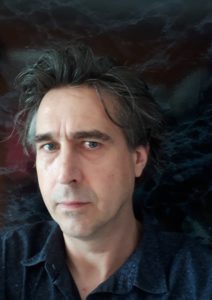 HN: You are an artist. Was that useful?

PN: In as far as understanding the need to knuckle down, the amount of work expected and needed, and dedication and self-motivation with the threat of deadlines. Knowing that it’s not necessarily a nine-to-five and embracing that. It’s also the zine attitude, the DIY world.

HN: What was the first book you published and the response?

PN: The first, I think, was still in the zine/pamphlet phase – Coffeeshop Philosophy by Irving. Quite a good reception and positive review in CityLife, and he managed to get it into quite a few stores himself. I didn’t have much to do with marketing there. Tony Curry’s The Noble Savage and Chloe Poems’ Li’l Book o’ Manchester followed and both did quite well as pamphlets – they’re both still available and sell, though now re-issued and perfect bound. The first ones to actually make their debut with a spine would be Manchester Poetry Festival Slam-winner Helên Thomas’s children’s collection We Are Poets! which won a Book of the Month Award from The Poetry Kit, and Dominic Berry’s Tomorrow, I Will Go Dancing. Both did well enough for me to carry on.

HN: Publishing is hard. What are the best and worst moments?

PN: The best moments are when an author agrees with your suggestions. Or when a proof copy comes back from the printer and there are no changes to make. The worst are when the stock doesn’t turn up till the day before the book launch and the covers are on upside down.

HN: What ambitions did you have to start and how have they changed?

PN: There weren’t really any specific ambitions. It’s always been more of a desire to facilitate the spread of words that need to be spread, and that’s an infinite project.

HN: What is happening in the immediate future?

PN: Two wonderful new collections out soon from the magnificent Henry Normal – This Phantom Breath and The Department of Lost Wishes – which I’m really excited about. The first launches at Manchester Central Library on September 6 and the other at Chorlton Library on November 21 during the Chorlton Book Festival. Then there’s a brilliant new collection of poetry and plays from Gerry Potter in late November. Next year looks quite busy. I’m working through three new manuscripts to be released into the wild before Easter (including two new authors for Flapjack’s unstable stable), and an anthology featuring everyone which will be launched on April 24 – though that still needs a bit of thought and I’ve not mentioned it to everyone yet. 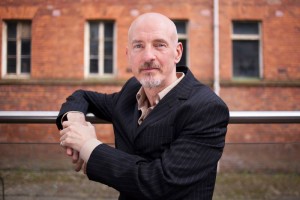 HN: You run gigs. Does this help in keeping in touch?

PN: Up to a point. At Flapjack, there’s always at least one debut collection a year, one of the core tenets, so getting out there and the discovery of something – someone – new is quite important. At the open mic night I coordinate, Word Central at Manchester Central Library, I always make a point of getting as many new voices (at least, to that night) on each month. Years ago, I helped set up Per Verse with the Reverend Conor A of the Church of the Improvised Word, and one of the most important aspects was the inclusivity and support offered to the open mic-ers. Hopefully this also runs through Word Central. The North West’s currently going through quite a good period for open mics, though it does go in peaks and troughs every few years, so there’s always somewhere to go in search of something new rather than the same old. Though unfortunately there’s always the odd one – and there always has been and always will be – where the only thing you come out thinking can be that there’s nothing worth keeping in touch with unless you’re a first year drama student who thinks Manchester’s London and that the view from up your own rectum is perfectly fine.

HN: Why specialise in performance poetry?

PN: If you’ve got something to say, it’s often worth saying it rather than just writing it. Performance poetry covers a multitude of forms and subjects and you can gauge a performer’s passion and belief. Not that a straight text can’t, but if you can see someone perform you can feel the energy and honesty. Going to a gig is always better than buying the single. Editorially, a poem that’s been regularly performed gets instant response and feedback for the poet, so they can self-edit, hone, improve or discard. So, by the time a manuscript is compiled, you have something that’s got a proven heritage and an audience-validated positive response. Plus, from a marketing p.o.v., if the author’s out there gigging regularly they can sell their books and spread the word.

HN: Can poetry ever pay its way?

PN: We live in hope.

HN: What is your relationship with Manchester?

HN: What annoys you most about running a press?

PN: Writers who don’t do any basic research. Surely that’s quite an important aspect of the art? For example, there’s a whole page on the website about submitting manuscripts. It says don’t. Not got time to look through any more at the mo, but still get several every week. Still get submissions to The Ugly Tree, and that stopped a decade ago. If you can’t do the basics I’ll happily assume you’ve not got anything worth my attention.

HN: Has it become too much work for one person?

PN: Not so much become, more always has been. I’m quite happy to take any consequences if I fuck up, but probably don’t have the patience to mop up anyone else’s mess these days. I did have a sort of art agent back in the 90s but that went a bit Withnail and I, so perhaps a team of one is still more about being in control when you never really are.

HN: If you could have published anyone in history who would it be?

PN: Too many to narrow down to a single name. Always had a soft spot for Larkin. Someone you could actually understand as a kid without a translation. Hardy, Eliot, Plath, Hughes, Ginsberg. Back to the Brotherhood and the Lake Poets, though as much as anything for lovely long debates about how much I’d cut and to tell them to loosen up a bit. It’s a list that could go on, Shakespeare, Chaucer…And I’d probably arrange to meet Edmund Spenser to go over a first draft at Manchester Art Gallery, so I could show him his bust – and that the curators have spelled his name wrong.

HN: If you could publish anyone living who would it be?

PN: Rob Auton would be somewhere on a list, but Dr Cooper Clarke would probably head it. I’ve just picked up some old Alice Oswald collections and like her more and more, but as Flapjack’s narrow-minded approach is for North West-based – or North West associated – performance poets I’d have to have failed O level Geography, which I surprisingly didn’t.

HN: Why is it called Flapjack Press?

PN: It actually stems from an old sketch on KYTV where Philip Pope’s character is being interviewed about his memories of Woodstock and randomly says “flapjacks”, which for some reason stuck in my head and always brings a smile. Like flapjacks do.

HN: Do you ever write poetry yourself?

PN: Not as much as I used to. I have a tendency nowadays to look through a manuscript and think “you’ve said that better than I could”, so whatever I do write tends to stay privately hidden as an early draft in need of a good kicking into shape. It’s probably over a decade since I last submitted anything to a magazine, which is a sad admission as I’m always telling people to do just that. Though I have dragged myself onto the stage at a couple of open mic nights recently, so this lull may yet become a storm. 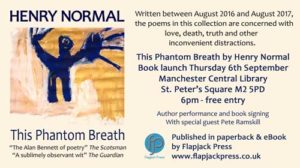 From the archives: It's starting to feel a bit autumnal out there, so we're re-sharing a photo gallery celebrating the colours of Autumn. 🍂🍂🍂 northernsoul.me.uk/photo-gall… pic.twitter.com/9P7ENtFOvd