In Manchester’s newly refurbished Corn Exchange there is an underground den of East Asian delights.

It’s a place where the lights are dim and there’s an enticing choice of exotic treats to satisfy what will swiftly become your newest guilty pleasure. Tongue-teasing, delight-inducing, tantalising…it’s a veritable smorgasbord of delicious food that will draw you back again and again.

Subtle, sharp, sour, sweet, spicy, succulent, scrumptious food – the dishes at Tampopo are all of these things and more. With a menu spanning several countries (what the kids these days call pan-asian) your meal could consist of delicacies from Japan, Vietnam, Indonesia, Malaysia, Singapore and Thailand, each with distinctive and unique flavours.

The restaurant itself feels like a backstreet eaterie in Thailand – not that I’ve ever been to that part of the world, it’s just the image the room conjures up. With a faux shabbified look, where brightly painted window frames have been meticulous scratched to look older and new mirrors are smudged, it’s obvious that this isn’t the real deal, but it’s about as close as you can get in a recently opened venue in Manchester. Grates on the ceiling barely cover giant air vents that emit a constant rumble audible under the ambient music, all of which encourage the downtown Thailand image, though I’m not sure if this is décor or accidently aesthetic. Lantern-style lamps, plenty of plastic palms and a projection of the animation Spirited Away on one of the walls gives the setting a fun vibe too. Don’t take yourself too seriously here, it says, this is a place to chill. 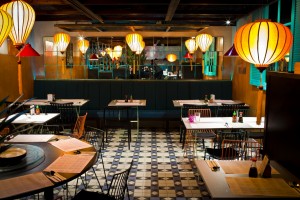 A street food menu matches the street food theme, with both small plates or main meal options available and, in line with the décor, the food is served on brightly coloured plates with blue-tinted glasses for the drinks, all adding to the feeling of not-your-usual-restaurant.

Now, first things first: Tampopo serves the best damn prawn crackers I’ve ever had. Not those pale, greasy things you get with a Chinese takeaway, oh no. Sand coloured and deliciously crisp and moreish, you will never be able to stomach those poor imitations again. As Wor Lad put it: “If they just put a big bowl of these in front of me and nothing else for the entire meal I’d still be pretty happy about it.”

But, as all good things must come to end, we moved on to more substantial courses. Wor Lad opted for the special of the day, beef massaman curry. Consisting of a creamy aromatic sauce topped with nuts, big chunks of potato and tender beef served with jasmine rice, this dish was easily our favourite of the mains. The tamarind paste and subtle spices were delightfully combined and proved that curry doesn’t need to be hot or strongly flavoured to be appetizing. 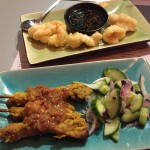 I tried three of the small plates – perfectly cooked and bubbly battered tempura prawns, Malaysian chicken satay skewers with a red onion, cucumber and peanut sauce, and Thai mussels tom yam style. The latter had a heat that bypasses your tongue to hit the back of your throat and was very tasty for the first few spoonfuls, though I couldn’t eat much because it’s very, very salty. It’s the kind of soup I imagine would cure a cold or a sore throat – like the products on TV that clear sinuses with one sniff.

From past experience I’d formed the idea that standard eastern deserts aren’t very good, but I became a convert at first bite of the chocolate coconut fondant cake. Made like a usual gooey fondant but hiding a desiccated coconut core, it was sweet and tasty, and worked especially well with the strange, almost savoury, black sesame ice cream. Meanwhile Wor Lad was having a ‘love affair’ (his own words) with the churros and chocolate sauce across the table. Sugared and crispy on outside, gooey on inside, this is exactly how churros should be.

It’s evident that the meals at Tampopo are made with fresh, wholesome ingredients, so you don’t feel too bad stuffing your face, though it is a tad pricey.