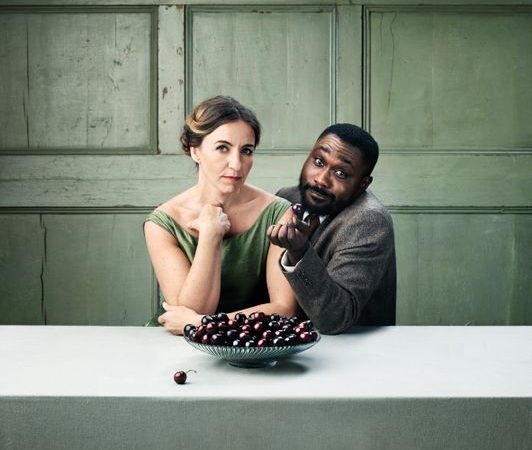 I’ve got a confession to make, I don’t know much about Chekhov. I know the name, of course, but I’d always swerved the Russian playwright thinking that his work was too depressing. I like a bit of melancholy every now and then, but do I really want to sit through two hours of hardship and cold winters? But I like to give things a try and, besides, a bit of ye olde Russian sorrow will at least make us feel better about our lives, right?

Wrong. What surprised me most about this clever, confident production, co-produced with Bristol Old Vic and directed by the former artistic director of The Royal Shakespeare Company, Michael Boyd, is the sense of immediacy. At times, it’s almost devastatingly relevant.

Returning home to her wealthy estate in Russia after several years away in Paris, Lyubov Andreyenevna Ranyesskaya and her family face the loss of their wealth, land, home and, worst of all, their beloved cherry orchard. The play was written in 1904 during a time of huge socio-economic change in Russia which saw the old world of aristocracy being replaced with increasing social mobility – and the freedom of the serfs. The family, despite being worried, are all in denial and continue to live frivolously. But who can blame them? After all, no-one likes change – and denial makes for a much comfier bedfellow than reality. 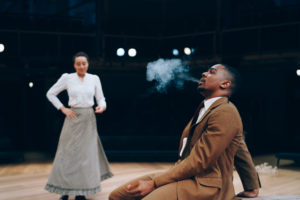 Translated by award-winning playwright, Rory Mullarkey, Chekhov’s “final masterpiece” (widely believed to be his greatest play) is given a fresh perspective. It’s still firmly rooted in the original tale –characters maintain their lengthy Russian names (hats off to the actors, some of them are a right mouthful) – but they also frequently tell each other to “keep your mouth shut.” These modern asides could have easily jarred the narrative, but it does quite the opposite and draws further parallels between 19th century Russia and the world we encounter today – enormous social shifts, disparity between the rich and the poor and the inability to let go or learn lessons from the past. Sound familiar? 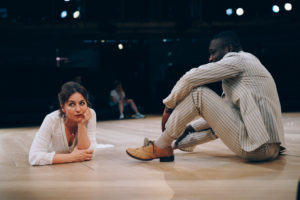 Particularly poignant is the scene where Lapakhin (Jude Owusu), the hard-working son of one of the family’s own serfs and now a wealthy businessman, finally buys the cherry orchard at auction and plans to chop it down. He delivers a rousing speech about the slavery his ancestors endured at the hands of the privileged and screams “I warned you” at a now sobbing Lyubov. But The Cherry Orchard isn’t about rejoicing this change, it’s also about lost things – time, people, youth, money and love. As the play progresses, the costumes become more modern – cherry coloured, floor length dresses become macs and spiked heels.

But it’s not all doom and gloom. There are some seriously laugh out loud moments where the entire theatre is in stitches. But it’s an uncomfortable, sharp-edged kind of comedy – a constant sense of menace and gloom snakes its way across the stage, coiling around each character and causing them to burst into moments of anger and distress. This is particularly evident in Lyubov, a grieving mother (played wonderfully by Kirsty Bushell) who constantly flits between child-like playfulness – “I can’t sit still,” she declares. “I’m so happy.” – and utter despair – “My boy, he drowned.” 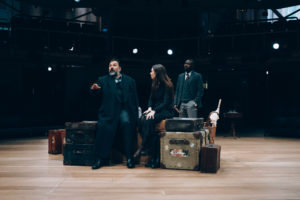 Michael Boyd’s production includes some truly beautiful and clever touches. The ghost of Lyubov’s young dead son, Grisha, moves about the stage unseen by all except his mother. He moves props, watches the gathering and then disappears. And there’s the chop of the axe which reverberates around the theatre, like a ticking clock, reminding us that change is fast approaching.

So, is the play a comedy or tragedy? The wonderful thing about Mullarkey’s interpretation is that we don’t have to choose. At its heart The Cherry Orchard is about grief – for loved ones, for missed opportunities – and the blurring of comedy and sorrow captures the process of mourning.

I was gripped by this production and urge anyone who isn’t sure if Chekhov is their cup of tea to rethink. I’m certainly a convert.

The Cherry Orchard is at the Royal Exchange in Manchester until May 19, 2018.

Win a pair of tickets to One Good Night at Manchester’s Hope Mill Theatre disq.us/t/3m8vrhv

How beautiful are the birds in our gardens and wild spaces? Check out this gorgeous photo gallery and, while you're at it, capture a feathered friend on camera and enter Wilko's Wild Bird Photography Competition 2020. northernsoul.me.uk/capture-a-… pic.twitter.com/cyvXWqIf1n