There is very little not to like about a three-year-old dressed as a witch doing the Time Warp. To the extent that this happened, the Lantern Company’s Halloween offering for 2018, a Monsters’ Ball in the elegant Victorian Palm House of Liverpool’s Sefton Park, was a hit.

It was also a hit in that, as ever, the company’s mischievous and charming illuminated puppets – a giant spider, a sombrero-wearing skeleton, George’s enormous grandma post-Marvellous Medicine – had the tiny revellers giggling and gazing upwards. And everyone loves an excuse to dress up, even if it isn’t actually Halloween yet. However, the Ball itself was a somewhat stilted affair. Caught somewhere between a piece of family theatre and a fancy dress disco, children were encouraged to dance to recorded pop tunes with vaguely spooky themes (think Little Mix’s Black Magic) only for the music to be turned off every ten minutes so that our costumed hosts could announce a ‘best dressed’ winner or stage a slightly lacklustre ‘Talentless Show’ sketch. This left some of the littler people confused about whether this was a free-flow running in circles or sit-and-watch affair and, with it fast approaching bedtime, a heady brew of over-excited bafflement and fatigue was bubbling if not quite explosive. The craft workshop earlier in the day had also been a tiny bit baffling. Ostensibly, the Day of the Dead-style masks were supposed to be made by the children, but with tasks that included cutting eye holes out of the middle of card sheets, stapling and using a sticky tape dispenser, it’s safe to say that the grown-ups were kept rather busier than the minions. 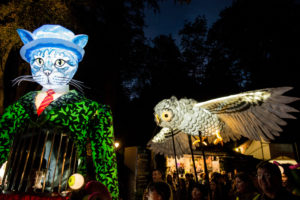 All that said, when it came to Ball-time, there were lots of smiles, lots of hammy witches’ cackles and a load of families having some ghoulish fun together without threatening the neighbours for sweets. As always with the Lantern Company, which has its illuminated fingers in many artistic pies around Liverpool and produces some inventive and visually stunning displays, the puppeteers were friendly and enthusiastic as well as skilful. Their thoughtfulness in taking the time to interact with little fans is what made the night special for our mini-witches, and left them falling asleep on the way home murmuring peculiar things like: “Mummy, the spider high-fived me!” There are worse ways to spend a half-term evening on not-quite-Halloween.