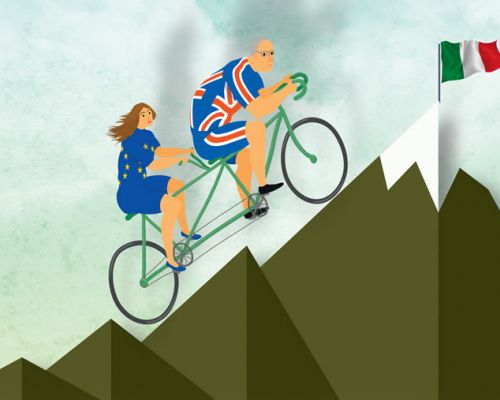 If the arts form the cultural mouthpiece for the country, then this play has taken the turmoil and division of Brexit and managed to distil it into something akin to an explanation, or at least an exploration, of what happened with the vote to leave the European Union.

Don’t be put off by the title – The Scary Bikers – which creates an image of something far more farcical. Although funny in places – proper laugh-out-loud funny – this two-hander is a sensitive, thoughtful production in which the son of a miner (Don) and an ex-teacher (Carol) set off on an adventure together after both losing a loved one. They meet one day in the cemetery and in the time after grief while searching for a new kind of normality, they begin to enjoy each other’s company, deciding to take a long tandem biking holiday to Florence. They leave on the day of the referendum, and guess what? One voted to leave and one voted to stay.

On paper this sounds like the perfect situation for a hilarious twee comedy, but that’s not Scary Bikers. John Godber’s play takes the mess of Brexit, the headlines, the idea of stereotype, the shock and the assumptions and reverses it all, retrieving the personal stories, the ideals, the longing for recognition and respect which shaped the Brexit vote.

As a production, it is well-written and so smooth (it has to be to cope with tandem biking) and well-rehearsed that it’s a pleasure to watch. The stage is sparse enough to give the dialogue room to bloom without distraction and the acting is superb – moving, heart-warming and heart-breaking. As a Northerner who voted remain and was shocked when many people I knew voted to leave, Scary Bikers struck a real chord. 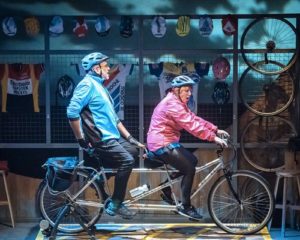 Cycling is the perfect hook on which to hang the whole idea of Brexit. As a nation we love sport and, as a Yorkshire woman, I can tell you that when the Tour de France came through the region we proudly pulled all the stops to show off our brilliant county. As I write this, my home town of Scarborough in North Yorkshire is being adorned with the yellow and blue bunting of the Tour de Yorkshire. In case you’re interested, the second leg of the tour finishes in Scarborough, something we’re pretty keen on celebrating.

We’re pretty keen on celebrating anything in Scarborough. We’re keen to detract from the familiar headlines about our town which say that we have the lowest income levels in Britain; that this town, with its pretty seafront and tree-lined valleys, has the highest heroin and other opioid mortality rates in the country.

Welcome to the North, where the majority of people voted to leave the EU on June 23, 2016 because they were promised things they’ll likely never get. I think the arts has a responsibility and is necessary for the interpretation of social history. And I think this funny, clever play is doing just that. Go watch it, go.

The Scary Bikers is on at The Stephen Joseph Theatre in Scarborough until April 7, 2018. For more details, or to book tickets, click here.