Review: The Curious Incident of the Dog in the Night-Time, The Lowry, Salford

Kevin Bourke January 27, 2017 Arts, Theatre Comments Off on Review: The Curious Incident of the Dog in the Night-Time, The Lowry, Salford 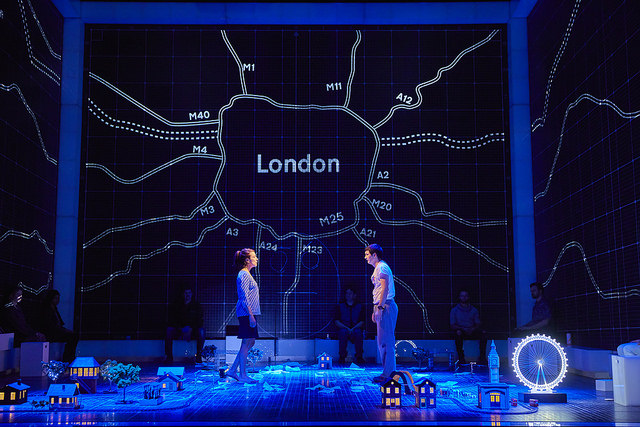 Over the past few years, The Lowry has become the spiritual home of this fiendishly clever and entertaining adaptation by Stockport-born writer Simon Stephens of Mark Haddon’s best-selling book, The Curious Incident of the Dog in the Night-Time. So it’s only fitting that the latest tour of this National Theatre production should start at the Salford venue where, almost inevitably, it triumphed again – in front, incidentally, of a first night audience including Stephens’ mum.

It is directed for the tour by Elle While, who started her career at the Octagon Theatre Bolton where, as youth theatre director, her productions included Mad World, Millboys, Blackwood, The Magic Finger and Just So Stories. 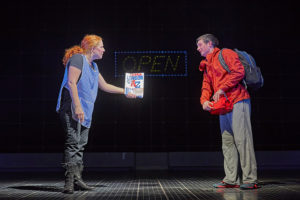 Like the show’s original director, Marianne Elliott (who did some fantastic work at Manchester’s Royal Exchange before her more recent National Theatre triumphs), While completely understands that, in order for this ambitious show to work, the audience have to quickly understand that they are inside the extraordinary brain of 15-year-old Christopher Boone, “someone who has behavioural problems” as the protagonist wryly reflects in the book (which, incidentally, is at pains to never mention Asperger Syndrome – unlike some reductive reviewers). The spectacular stage design reflects this aspect of Boone’s character but this isn’t a show that depends on its effects to affect the audience. For that, it relies on Stephens’ script and, crucially, on the acting performances, specifically the young actor playing Boone – in this case Scott Reid, who rises to the challenge magnificently.

As the show opens, it is seven minutes after midnight and Christopher is standing beside Mrs Shears’ dead dog, which has been speared with a garden fork. Under suspicion himself, he records each fact in a book he is writing to solve the mystery of who murdered Wellington, and one of the show’s clever conceits is that the book is being turned into a play, just like the one we’re watching. Boone is exceptional at maths yet so ill-equipped to interpret everyday life that he has never ventured alone beyond the end of his road, detests being touched and distrusts strangers. But his detective work, forbidden by his father, takes him on an epic frightening journey that upturns his world.

What this journey makes clear, and is a significant part of what makes the show so exhilarating, is that, as Stephens points out, “Christopher sees truths about our world that we have never seen before”.

This makes the show repay repeated viewings; this is a terrific new production of a thrilling, resonant piece of theatre.

The Curious Incident of the Dog in the Night-Time is at The Lowry in Salford until February 4, 2017, then touring. For more information, click here.

Tags: Kevin Bourke, Review, Simon Stephens, The Curious Incident of the Dog in the Night Time, The Lowry, theatre