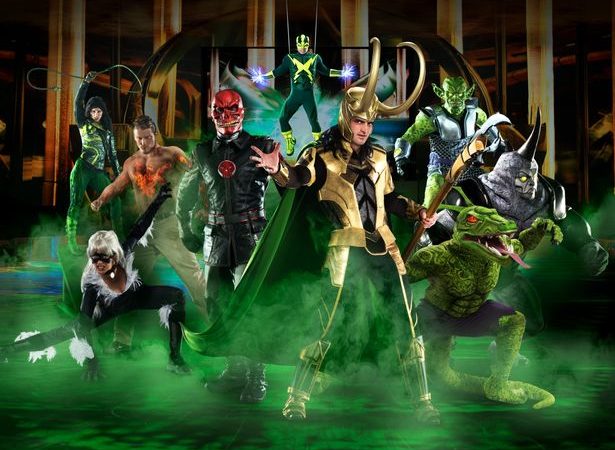 On a chilly January evening, Northern Soul finds itself in a packed Manchester Arena pondering the notion of ‘astonishment fatigue’.

It’s the idea, most often applied to news junkies, that it’s almost impossible to process the daily barrage of extraordinary events without eventually becoming numb and wrung-out. Chances are that the last couple of weeks have seen a record number of casualties. Here tonight, we’re at the shallow edges of the phenomenon. But after an hour of watching people dressed as super-powered mutants having staged fights with people dressed as aliens, megalomaniacs or animal hybrids, some of whom are on fire at the time, part of one’s mind does begin to shut down and accept it all as business as usual.

Marvel Universe LIVE! hinges on a plan by Asgardian ne’er-do-well Loki to create a clone version of the all-powerful Cosmic Cube by harnessing the abilities of blah blah blah. Oh, let’s face it, the plot here is just a spindly excuse for a cavalcade of Marvel goodies and baddies to assemble and go at each other. The (pre-recorded) dialogue isn’t up to much, but then, the performers aren’t actually delivering it. Besides, they wouldn’t be able to register the audience’s reactions in a big, dark, noisy venue, so any real zingers wouldn’t exactly hit home. Basically, this is one long display of physical stunts and action set-pieces, a sort of Cirque du Soleil for the Minecraft generation. 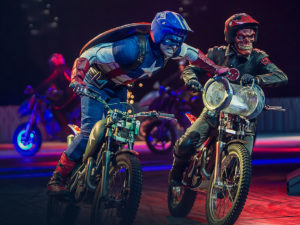 Actually, the question of exactly who this is all for is an interesting one. In terms of the look, feel and character line-up, it’s probably closer to the recent slew of Marvel feature films rather than the original comics, though Robert Downey Jr and Chris Evans have never been so quick to pull somersaults on stunt bikes. Still, the movies all carry a 12 certificate, and audiences of that age might find this show on the infantile side. It’ll appeal more directly to younger siblings who haven’t seen the films yet, unless they’ve been flagrantly flaunting BBFC guidance (*cough*). Certainly, it plays like a large-scale panto, with the audience booing the villain and shouting ‘behind you!’ when henchmen try to creep up on our heroes. Even the Hulk outfit rolled out at the denouement has the slightly floppy air of a pantomime horse.

The least enticing element of all superheroes movies tends to be the inevitable scenes of biffing-up, and essentially this is two hours of fighting. There’s a surprising lack of effects beyond (Jack?) Kirby wires, bikes and pyrotechnics, and though the second half ramps up the momentum, the climactic battle could do with a bit of satisfying extra spectacle to push it all the way up to 11.

It’s easy enough to carp, but fair’s fair, this is expertly orchestrated stuff, and it is genuinely live, rather that being reliant on action on big screens. This writer can even admit to a not-entirely-ironic whoop or two at the conclusion. It’s a big, daft, flashy spectacle, but that is the general idea, and in that respect it’s a passable enough live approximation of those movies. It might never earn its own chapter in the Marvel history books, but younger true believers and unfussy grown-ups will find much to enjoy.