Book Review – The British Mosque: an architectural and social history by Shahed Saleem

In the North of England, the chances are you’re closer to a mosque than you think.

The classic image of a mosque building summons up ideas of a dome, a tower (minaret), arches, latticework and Arabic calligraphy. That archetype might be reasonably accurate in some countries but in this new book the architect and academic Shahed Saleem explains how not all mosques look alike. There could be one on a street near you.

In the UK, only 16 per cent of mosques are purpose-built. Just under 40 per cent are in converted buildings or spaces that have been reused in some way. The rest are what are known as ‘house mosques’ – suburban dwellings, purchased or rented by local Muslim communities to be used as places of worship. As a result there are fewer domes or minarets than you might expect and often limited street-level signage. 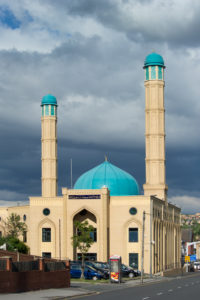 The British Mosque goes beyond architecture, though. What makes the commentary meaningful is that it also sets mosques in a social context.

Britain probably has the most diverse Muslim community in the world. Global immigration in the last century, particularly from the Indian sub-continent, has been a catalyst for a shifting architectural and social landscape. This book describes the diversity of the mosques in which people worship and how they are representative of their shifting communities.

Saleem is also honest. He doesn’t pretend that building mosques is plain sailing. He acknowledges the racial, ethnic and political tensions that arise when communities come together to make places of worship. Ultimately, though, this book seeks to be a celebration of British mosques rather than a study of social tension.

While Saleem has produced a huge architectural set of information for public consumption, I suspect that Historic England, the publishers, have not decided exactly who the book is aimed at. The author has worked hard to make the text accessible and socially relevant but the book ultimately remains an academic undertaking and will be more useful as a reference tool for the architectural, religious or social specialist, rather than as a way in for general readers.

Academics will appreciate the scale of the research endeavour and the quality of the data. They will dine on the statistics, the maps and the analysis. Meanwhile, generalists who enjoy either architectural or social history will appreciate the contemporary relevance and will dip in and out of the chronological chapters. But they may find that locating their nearest mosque – perhaps just a few streets away – is no easier once they own this title. And it lacks the commercial appeal and high quality photographs that a book for the mass market requires. 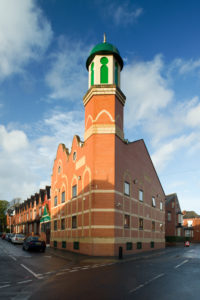 I’m left wondering what someone might do with Saleem’s tome. The content would make the great basis for a TV documentary script. A shorter, lighter book might have more appeal with the book shop regulars. Or, with some great new photography, the content could frame a splendid touring exhibition (for which this would be the catalogue).

The British Mosque is certainly a significant step in our architectural history. But at £60 I doubt it will fly off the shelves and onto the nation’s coffee tables. Perhaps Historic England will be able to draw on this research to produce something for a more generalist audience that really celebrates the very best of mosque architecture across the country. 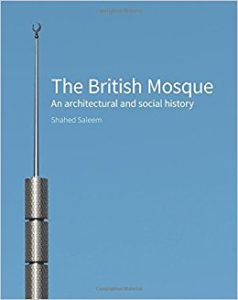 For details about The British Mosque: an architectural and social history, £60, follow this link: https://historicengland.org.uk/images-books/publications/the-british-mosque/