Are computer games just for kids? Over the years this question has vexed many great cultural commentators (even though the answer is obviously ‘no’). As far as Ready Player One is concerned, it seems to have stumped Steven Spielberg too.

It’s a return to the family action-adventure formula with which made his name. Based on the best-selling 2011 novel by Ernest Cline, Ready Player One concerns a dog-eared near-future world where all and sundry lose themselves in the immersive virtual reality world OASIS. As OASIS creator James Halliday (Mark Rylance) departs this mortal coil, he reveals that there’s a special game hidden within, the winner of which will inherit his vast fortune. Needless to say, the world and his wife promptly throw their hats into the ring, with the narrative here zoning in on young gamer Wade Watts (Tye Sheridan) and his cronies.

So far, so Willy Wonka – plus, as Halliday remains rendered within the game, a dash of The Wizard of Oz. As the contest hots up, it blends in a generous helping of The Matrix too. In fact, the entire film is a kedgeree of pop culture references, be they little in-jokes from within the OASIS world to more substantial nods such as an extended Kubrick homage. Whether the film amounts to more than the sum of its parts is another matter, though. 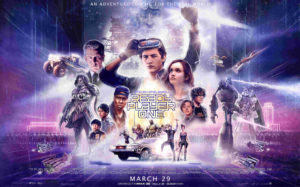 Back in his heyday, Spielberg made it look effortless to please audiences of all ages at one and the same time, but this is far less assured. It’s as though he’s aiming for the pantomime trick of delivering thrills for the nippers while winking broadly to the adults, but it fails to come off. Instead, it’s a film which can’t decide exactly who it’s for and instead falls between several stools. Spielberg’s far too adept at this kind of thing to blow it entirely, but it’s never quite as pulse-pounding as you’d hope. It’s very much a straight-ahead, predictable ‘ticking clock’ quest-cum-morality tale, flawed fun but nothing more. It feels curiously like a young Spielberg devotee having a half-baked go at ripping him off rather than the work of the man himself.

The lead performances are rather underwhelming, though the dependable Ben Mendelsohn brings a degree of panache as arch-baddie businessman Nolan Sorrento and Rylance pops up to twinkle expertly as gamesmaster Halliday. Some structural narrative tweaks have been made from Cline’s novel but for the most part they stand to reason. Scenes set within the OASIS demonstrate some visual flair, though they’re bound to date quicker than fresh milk. Arguably, perhaps, a built-in retro look is part of the design. The real-life future world is less impressively realised, though. Basically, it appears that by 2044 we’re all going to be chased about by flying drones while living in caravans stacked up like rusty boxes on a garage shelf. Of course, there’s an inherent problem in making it visually interesting to watch people play computer games and operate software. However, Spielberg does have previous with tackling this, chiefly with Minority Report, and for the most part he pulls off the same trick here. However, there remains the deadly sneaking suspicion that watching Ready Player One is less fun than actually playing the barrage of games it references.

The score, by 80s soundtrack maestro Alan Silvestri, fits the bill nicely enough, though the constant array of period pop songs dotted throughout is less Forgotten 80s, more Blindingly Obviously 80s. If there’s something fundamentally Not Right here, it’s that the whole film hinges on this love of popular culture from the 80s and then-abouts. Beyond the character of Halliday being obsessed with it, it’s not entirely clear why that’s such a big deal in 2044. Has nothing of note happened since? Given that Spielberg himself was such an avatar of the 80s, this can’t help but feel self-congratulatory. You didn’t get David Bowie making films about how the 70s were the only decade that mattered. There’s also the curious fact that, as our nerdy action hero Wade, Tye Sheridan is the spitting image of, um, young Steven Spielberg (never mind paging Dr Freud, in the circumstances it might be best to fax him). 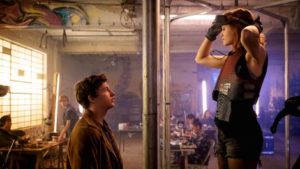 Some might argue that, at the age of 71, Spielberg should just knock it off with lightweight, knockabout runaround stuff meant for punters a fraction of his age and instead tackle weightier matters. In these days of Trump and Cambridge Analytica, there’s certainly a fascinating film to be made about the age of digital identities and rampant greed, though obviously this isn’t it. To be fair, it doesn’t try, but in attempting to be all zeitgeisty by depicting a near future obsessed with the recent past, it doesn’t manage to satisfy anyone sufficiently, be they young or old.

Ready Player One is on general release