A word of advice: don’t go and see Miss Saigon if you’ve had a big tea. The opening scene features a slew of barely-clad dancers who look like they need a good fish supper. Just watching them made me regret ever eating carbs.

But do and go see Miss Saigon if you want to see a magnificent musical, one that spends proper money on sets, lighting, music, choreography and performers, and leaves the audience fully sated, replete with unforgettable tunes and tears in their eyes.

As a reviewer, it’s hard to know where to begin with a show that is 12 months short of its 30-year anniversary. I mean, Miss Saigon has been performed in 32 countries, 369 cities and in 15 different languages. It has won more than 70 awards and, if the publicity blurb is to be believed, been seen by more than 36 million people.

Theatre impresario Sir Cameron Mackintosh has the magic touch. Witness his success with a gazillion of theatrical productions, from Phantom of the Opera and Cats to Les Misérables and Mary Poppins. Although I suspect that when he first opened Miss Saigon at London’s Drury Lane in 1989, it wasn’t an obvious choice for a hit. The Vietnam War had been over for just 14 years and was fresh in many people’s minds. It was a terrible war, an unwinnable war, and a war with casualties in the hundreds of thousands, if not the millions. 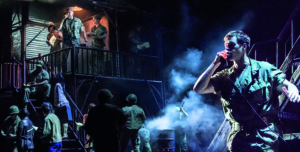 It’s now more than 40 years since the end of the Vietnam War. So you have to wonder whether Miss Saigon will resonate with today’s audiences. Then you see that this is a production focusing on refugees, people fleeing by boat, children left as orphans, and the horrors of genocide. It says nothing good about the human race that Miss Saigon is more relevant than ever. There’s a scene around mid-way through when a big screen displays images of children left homeless and alone by the Vietnam War. I bet I wasn’t the only one sitting in the darkened auditorium of Manchester’s Palace Theatre whose thoughts turned to the displaced Rohingya people in Myanmar or the TV images of Syrian boys and girls.

But there’s more than this dreadful recognition of history repeating itself to Miss Saigion. There’s the shared acknowledgement of love gone awry, the gnawing desperation of longing for another person who is no more than a memory, the pitiless hope that marks the human condition. In short, Miss Saigon is a story of shared experience.

The capture of Saigon by the North Vietnamese Army in April 1975 marked the end of the war, and this is where Miss Saigon begins. It’s a love story (what else?) played out against a backdrop of conflict, a musical to end all musicals. Miss Saigon has it all: set-pieces that make your heart skip a beat, lyrics and music by Alain Boublil and Claude-Michel Schönberg that stay with you long after curtain-down, and central performances that leave you all-a-wonder.

As the first Korean actress to play Kim, Sooha Kim as Miss Saigon is flawless. She effortlessly embodies both innocence and experience with a pitch-perfect voice, and her love for Chris (Ashley Gilmour) is easily understood. Gilmour, too, is perfectly cast, one minute belting out a love song, the next shaking with frustration and anger. And I’ll not lie to you – I really liked it when he took his shirt off. 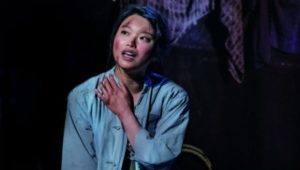 Like Boublil and Schönberg’s Les Mis, this is a story of high emotion and high stakes. Indeed, there were many echoes of that seminal musical, both in tone and emotion. And, like the Thénardiers in Les Misérables, Miss Saigon has its own comic – albeit vaguely sinister – turn. I didn’t care for the Thénardiers and I didn’t care for Saigon’s bawdy Engineer, but the audience lapped him up.

Miss Saigon is in Manchester for eight weeks. You’d be a fool to miss it. Just don’t sit next to the couple I had the misfortune to be cheek by jowl with last night. At any one point, one or t’other of them was vaping, talking loudly to their partner, looking at their phone, scratching around a Haribo packet or using a massively distracting light to make notes. All this leads me to believe that the male of the two was a fellow critic. Or just someone who owns a computer and didn’t give a feck if anyone around them enjoyed the show. 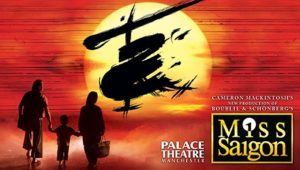 For tickets for Miss Saigon, which is at the Palace Theatre until May 12, 2018, follow this link: www.atgtickets.com/shows/miss-saigon/palace-theatre-manchester/