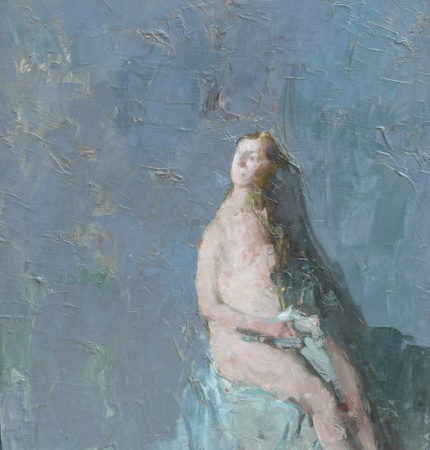 “Working people remaining stolid against the backdrop of hardship.”

Susan Eyres, owner of Gateway Gallery in Hale, believes that her current exhibition, Olga Geoghegan, Out of Place, has much in common with the Northern British artists who are the gallery’s specialism. Exhibiting for the first time in the North of England, Olga Geoghegan is a skilled painter of humanity’s deep spread of emotions. Her paintings are evocative of many of the traditional themes painted by L.S Lowry and the Northern School of artists.

Geoghegan was born Olga Yukhtina in 1965 in the sub-arctic industrial town of Ukhta, a place infamous for its Gulag in the far northern reaches of the USSR. Showing significant artistic promise as a child, she attended the illustrious Leningrad (St.Petersburg) Academy of Art where she was classically trained in painting as well as theatrical decoration under the supervision of famed artist and stage designer, Professor Kochergin. It was also in Leningrad that Geoghegan came into contact with the second wave of the Russian avant-garde, which began to flower following the death of Stalin.

She was born at a time when Brezhnev was President and the state-sanctioned ‘Socialist Realism’ form of art that pervaded throughout the Soviet art world demanded conformity; all those who sought to express themselves differently were harassed ceaselessly by the Soviet authorities. After the fall of the USSR, she was one of the first Russian artists to be exhibited in the West, in places as far as London and Vienna. She eventually moved to London in 1998.

While her paintings display indications of her formal training, her work is characterised by the placement of the subject front and centre. Sometimes alone, sometimes in small groupings, they seem strangely disconnected from their surroundings and each other, and are at the mercy of her imagination. Covering still-life, portraits and elements of landscape painting, many of her paintings embody a pathos of alienation and melancholic individuality. 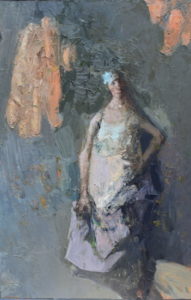 One example is contemplation, painted in 2014, which depicts a solitary semi-nude figure sat in a blue backdrop that could easily be the sea or a blue room. Ominously, the figure’s head is turned towards a shadow appears in the bottom left-hand corner of the painting.

The Baguette Seller (2015) – a lone woman whose profile faces the viewer with baguettes depicted in the top-left corner – is a pertinent example of Geoghegan’s subject matter and technique; all of her paintings are oil on canvas and many encompass a variety of methods to apply the paint. For this work she has used a palette knife, paintbrushes and her finger to apply the paint, all of which adds a significant range of texture to the canvas and helps to convey a depth of expression. Particularly notable is the impasto (thick layers of paint) used for the baguettes nearest to the single figure.

Geoghegan says she paints “collective feelings and emotions”. She adds: “I don’t share many first hand stories with my audience – that wouldn’t feel right – but I do bare how I have felt about the things that have happened to me.” Leaving interpretation to the viewer, her paintings cut across many of the themes that are ever-present in humanity. “People have very different life experiences,” she says, “but their humanity is constant, wherever they are from and whatever era they have lived through.”

The exhibition is on until March 31, 2018. For more information, follow this link: www.gateway-gallery.co.uk