Helen Nugent March 28, 2013 Uncategorized Comments Off on The Manchester Starflyer

The publicity for Manchester’s newest attraction calls it “The Tower of Thrills”. I prefer to refer to use my sister’s description, “Not for all the tea in China, my friend”.

The Starflyer purports to offer a unique view of the city and, at 70 metres high, I’m sure this claim is entirely accurate. But the vista may be a bit blurry: the Starflyer transports up to 24 people into the air and then spins them round. Very fast.

This new take on the traditional chair-flyer rides will take pride of place in Piccadilly Gardens from March 29, 2013. People with nerves of steel will have until June 30 to put their mettle to the test at £6 a go (or £20 for a family concession ticket – two adults and two children). Council chiefs hope the Manchester Starflyer will attract up to 10,000 people a week to the city centre.

This hair-raising addition to the city’s skyline is the first step in making Piccadilly Gardens a family friendly destination and will be followed by a (presumably less intimidating) children’s play area in the summer. In the meantime, you white knuckle enthusiasts had better get queueing. I’ll be cheering you on – from the ground. 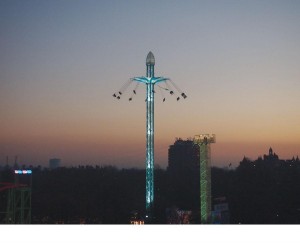 What: The Manchester Starflyer