The lights dim against the Mexican-themed backdrop on the stage. The accordion is briefly tinkled with and I see the eyes of many dart about like ships lost at sea. Few artists can evoke such a mixture of worry and excitement without a chord yet being played. Silence… Then a falsetto which makes the Bee Gees sound like Barry White with a cold breaks the ice of a Manchester night. The Tiger Lillies are on stage. The band, who never rest on an inventory that consists of 37 albums, have a new junkie opera.

Looking their usual unusual selves, one can almost hear Edgar Allen Poe operate the smoke machine as they slide into their opening number, Day of the Dead. Lead drinker Martyn sits for the second number and it’s everything art should be – a knife to the mind, guttural and honest under a guise. Here is an artist who has, thankfully, never written a typical boy-meets-girl lyric nor has he painted an autobiography through rhyme. Yet the Wildean epigram of “give a man a mask and he’ll tell you the truth” screams with disco-intensity through Orphan, their second song.

We’re already on a journey through Corrido de la Sangre, the tale of the beautiful Maria, the drug baron who shouldn’t have crossed her and a few figures in-between, all brought to life by the stunning stage visuals and, of course, the multi-instrumental Adrian Stout and harsh winter drums of Jonas Golland.

The story goes on and, without giving too much away, Maria will become more important to you than that pint beneath your seat (this is coming from a profoundly alcohol-dependent writer). There is a point of the story/gig where Martyn, Adrian and Jonas howl at the moon and you’re suddenly beyond a dream directed by David Lynch.

For information about The Tiger Lillies upcoming shows, click here. 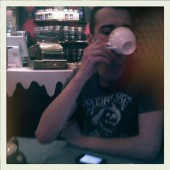