When Tim Burgess’s autobiography Telling Stories was published in 2012, no-one seemed to have any great expectations. Whatever gifts Burgess had developed as front-man of The Charlatans, he wasn’t particularly considered as a master word-smith. So it was all the sweeter that Telling Stories turned out to be a bit of a gem. Not destined for the Man Booker long-list, perhaps, but it was an eventful, engaging tale told with warmth, wit, honesty, a neat turn of phrase and a winning lack of pretension.

In his introduction to this follow-up, Burgess makes no bones about struggling to come up with a strong idea that could fill another book, beyond the (admittedly cracking) title of Tim Book Two. In the event, he’s chosen to write a very personal paean to record collecting. Over a long series of short chapters, he solicits suggestions from famous friends, mostly from the music business, for classic albums which they think he ought to own on original vinyl, and then hunts them down in a succession of record shops across the world. 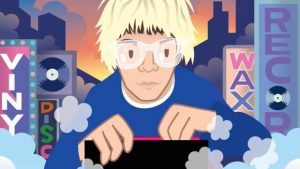 It’s a premise with promise but in the event it doesn’t quite pay off. For one thing, curiously, there’s very little here on Burgess’s actual reactions to the various albums once he’s got them. There’s a lot of material on the big names who suggest the albums and how Burgess has come to know them, ranging from Bobby Gillespie to Iggy Pop via Sharon Horgan, Paddy Considine and David Lynch.

There’s also some strong, evocative material on the highs and lows of endlessly hunting through record racks which will surely strike a chord with any dedicated collector (Burgess’s other pet obsessions – coffee and Twitter – make several cameo appearances). But it’s anti-climactic not to then respond to the albums he finds. Fair enough, in some ways the hunt itself is everything, but it doesn’t reflect Burgess’s love of music when he misses so many chances to talk about it.

Some genuinely fascinating albums – Tomita’s Snowflakes are Dancing, Sibylle Baier’s Colour Green, Pearls Before Swine’s One Nation Underground, Roxy Music’s eponymous debut – are sought out at length, but only discussed in passing, and in truth they deserve more (trainspotting marks deducted too for the chapter featuring Dexys’ Kevin Rowland, which includes mistakes on his band’s name, the name of one of his key band-mates and the title of one of their albums).

It has to be said that much of the subject matter here has been covered with great skill by other writers in recent years: there’s Richard King’s wonderful Original Rockers, Graham Jones’s book (and accompanying documentary) Last Shop Standing; even Nick Hornby’s High Fidelity and 31 Songs. This time around, then, Burgess’s writing style becomes a double-edged sword. His chattiness and genuine enthusiasm is certainly infectious, and this is always readable. But it’s also choppy and scrappy. The overall effect should be cumulative, and instead it becomes rather flat and formulaic. All told it doesn’t amount to anything other than ticking items off a wish-list, a quest without a satisfying pay-off, and that doesn’t make for a compelling read.

It doesn’t hit the heights of Telling Stories, but at times Burgess does turn up some genuinely interesting insights on the life of a vinyl collector, and it still marks him out as a refreshingly decent writer. He may yet have another fine book in him, but regrettably this isn’t quite it.