A new exhibit at the People’s History Museum in Manchester offers a stark reminder of what women went through to secure the vote.

Unless you’ve been living under a rock, you’ll know that 2018 marks the centenary of the Representation of the People Act. As part of this reform, women over 30 who were property owners were granted the right to vote. To celebrate this milestone, the People’s History Museum is staging Represent! Voices 100 Years On which celebrates the determination and spirit of the suffragettes and their legacy. 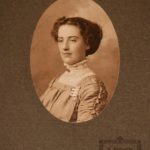 The show, curated by Helen Antrobus, programme office for People’s History Museum, is comprised of loaned exhibits and collections from groups including Safety4Sisters, Manchester Women’s March, 42nd Street and the Proud Trust. Bright and bold posters from the second-wave of feminism detail marches fighting for equal pay and a call to end sex discrimination.

The exhibition’s focus is a collection of suffragette materials, including a recently acquired Manchester suffragette banner from 1903 which reads ‘Manchester – first in the fight, founded by Mrs Pankhurst’. Still striking in bright purple, a colour that represented dignity for the suffragettes, this was discovered in a charity shop, then auctioned and eventually bought by the museum.

Another key part of the exhibition is a discovery made by Antrobus. Phillip Sycamore, the grandson of Selina Martin who was a working class suffragette from Ulverston in Cumbria, has loaned some of his grandmother’s personal collection to the museum. Among the memorabilia, which includes letters, a WSPU hunger strike medal, and a photograph of her wearing her Holloway Prison brooch, is a handwritten letter. It’s particularly special because it is one of the first written accounts of suffragette force-feeding. 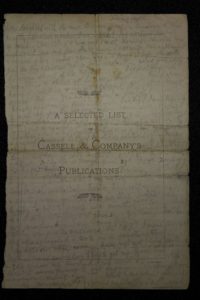 Antrobus says: “It took my breath away when I realised what I was reading. Even over 100 years later, the strength and the suffering of Charlotte and Selina chimes through. It was a very emotional moment, reading Charlotte’s words for the first time.”

The note to Martin was penned by Charlotte Marsh, a middle class suffragette from Newcastle, when she was in prison in November 1909. Written faintly in pencil on a title page torn from a book and smuggled from her cell, it describes ‘tubings’, details their regularity, and relays how she is made to eat by force through a spout. After seeing the letter, it’s clear that it was composed in a hurry. It’s easy to imagine the panic before a matron appeared to begin the force-feeding. Marsh says: “Won’t it seem funny to eat again. Sometimes I am ravenous, aren’t you? No surrender!”

This is a stark reminder of the physical and emotional endurance that suffragettes went through to fight for equality. They were united in their beliefs and supported one another regardless of wealth and background. Antrobus tells me that the letter is of national importance because it “shows solidarity between women of different classes, of different cities, who never would have met had they not been brought together by a cause. It shows immense bravery and fear, and it leaves us with all the lessons that feminists today should take forward.” 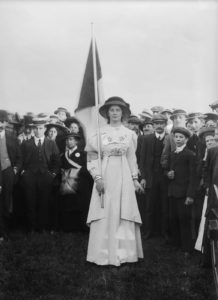 Along with Martin, Marsh was arrested for protesting with six other women when the then Prime Minister, Herbert Asquith, visited Bingley Hall in Birmingham. Both Martin and Marsh were held in Winson Green prison, Birmingham.

The exhibition is a must for people who are interested in early 20th century history and the feminist movement. Seeing first-hand accounts of the brutality the suffragettes underwent, risking their health, employment opportunities, marriage and name is inspiring.

Antrobus says: “Anybody who visits the People’s History Museum should come and see the letter, but I’d encourage anybody who feels like their voice isn’t heard, who is struggling to feel equal and represented, to also view it. These are the women on whose shoulders we need to stand, and take inspiration from.”

People’s History Museum is open all week from 10am to 5pm; Radical Lates are on the second Thursday each month, open until 8pm. The museum is free to enter with a suggested donation of £5.