U2 rolled into town as part of their eXPERIENCE + iNNOCENCE tour and turned Manchester Arena into the smallest large venue around.

As Bono explained in his introduction, the band first performed in the city back in 1980, at Manchester Poly, as a bunch of young innocents. They return now as men, looking to regain this lost innocence. What did he mean by that? Innocence? 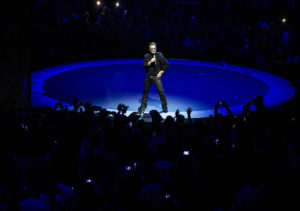 Well, U2 have been one of the biggest bands on the planet for nigh on three decades and are more used to football stadia and headline festival slots. Perhaps there’s a longing to play the sorts of venues they were playing in the early 80s? Maybe they yearn to get back to their roots. The Arena is significantly smaller than the Etihad or Old Trafford, but it’s no Manchester Poly either, and certainly not what you’d describe as intimate.

And yet U2 manage to make this large gig small, thanks primarily to the extraordinary set designed by Es Devlin, who has designed stage sets for everyone from Adele to Kanye West. It slices straight through the venue, not like a partition but like a window. A screen that actually contains U2, it moves up and down, with a platform remaining for the band to walk almost the full distance of the arena. Images aren’t just projected onto the set – they explode out of it. A main stage is the setting for the majority of the evening, with extended forays down the walkway by Bono and the rest of the band.

Their set tonight is dominated by the 90s and more recent releases, but it’s largely an autobiographical journey through their 40-year career

A heavy-hitting trio of Stay (Faraway So Close), Wild Horses and The Fly is performed by the band spread out down the length of the venue, and by this time, the crowd is in raptures. Wherever you are in the venue, thanks to this unique staging, you don’t miss a thing.

However, it’s when they make it down to a small circular stage for the ‘Vertigo section’ that the night really takes off. Those of us lucky enough to be near the platform were treated to a bunch of lads getting down to the business of being a proper band – none of this stadium nonsense, they can see the whites of our eyes, we’re no more than 20 feet away, and you get the impression this is as close to an intimate gig as U2 are ever going to get now. When they occasionally turn in to face each other, it’s as if they’ve forgotten we’re even here. And there are 20,000 of us. Blistering versions of Elevation and Vertigo give way to Even Better Than The Real Thing, a massive circular lighting rig transforming the space into a nightclub. 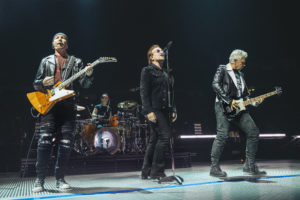 In one of only two nods to the band’s 1980s catalogue, there’s a spine-tingling version of Pride (In The Name Of Love), with Bono at one end of the arena leading the crowd in a mass singalong, the rest of the band back on the main stage. Then a rip-roaring New Year’s Day (the most political performance of the night) has the EU logo emblazoned across the screen in an unambiguous call for European unity. The night closes with 13 (There Is A Light), movingly dedicated to the victims of the Manchester Arena bombing in May 2017.

So, will U2 ever find what they’re looking for? A return to the innocence of their youth? It’s unlikely. In fact, it’s impossible. But on tonight’s showing, they’re having a pretty great time in the attempt.