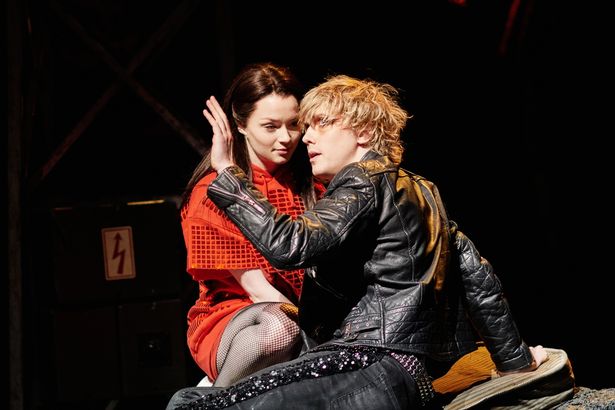 Part of the strange charm of the original Bat Out Of Hell recording has always been that it was unashamedly grandiose and knowingly absurd, and that, lyrically and presentation-wise, it was also pretty funny. That was absolutely its saving grace and surely the factor that, eventually, brought record-buyers around to it in their millions.

At about the same time, of course, that love of rock ’n’ roll mythology (while recognising its fundamental foolishness) was being taken in the opposite, minimalist direction by The Ramones and some of their co-conspirators. Music history has probably been kinder to The Ramones but that’s at least partly because there’d never been anything quite like Jim Steinman’s concept, a delirious mixture of a larger-than-life, ridiculously-named performer with a Wall Of Sound re-imagining of every rock trope out there. And there certainly hasn’t been anything since, notwithstanding various misguided further ‘Volumes’.

It’s both ironic and unfortunate for Jim Steinman’s Bat Out Of Hell – The Musical, to give the show its full, legally approved title, that although it’s well known the songs and concept came from a musical theatre piece Steinman had begun working on and employed Meat Loaf to perform, that was five decades ago. Now, BOOH finally appears in the middle of a theatrical landscape fairly littered with rock musicals, most of them chuckle-inducingly grandiose and almost all of them simply stupid – We Will Rock You anyone”?

So the only way for the show to go, to employ a well-worn rock cliché, is to turn everything up to “eleven” – and I don’t mean just the live band but also Jon Bausor’s jaw-dropping set, for which the stage, and a fair bit of the auditorium seems to have been gutted, as well as the performances and the pyrotechnics. This might be one of those rare shows worth showing up for just for the sheer visceral experience of seeing it. 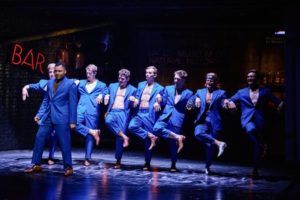 Inevitably, it’s all set in a near future dystopia where The Lost (that ‘lost children’ allusion and a character called ‘Tink’ a reminder of its origins as a rock ’n’ roll re-imagining of Peter Pan) live underground and, because of a genetic mutation, never get older than 18. Strat (Andrew Polec) is their charismatic leader, although his charisma doesn’t seem to extend much beyond a few half-baked Jim Morrison impressions. Above ground, where they and their goons seem to be the only inhabitants, is the domain of evil(ish) overlord Falco (Rob Fowler) and his frustrated rock-chick of a wife Sloane Sloane (Sharon Sexton), who live with their over-protected and typically teenage daughter Raven (Christina Bennington) in a towering skyscraper named for the despot. Hmmm.

Mid-riot – at least I think that’s what was going on – Strat falls for the never-knowingly over-clothed Raven, Daddy gets a bit upset, and, erm, that’s it really, plot-wise.

There’s some terrific singing and at least one truly tremendous set-piece, with Falco and Sloane trying to patch up their failing marriage with a duet, Paradise By The Dashboard Light, that finishes explosively with a presumably horrendously expensive gag involving an onstage car being pushed into the orchestra pit. But the show just never knows when to stop. Already portentous songs like Bat Out Of Hell, Dead Ringer For Love and You Took The Words Right Out Of My Mouth are often stretched out wildly, apparently just so each cast member can have a go at singing them, while some of the dance routines are as clunkily unattractive as Strat’s woeful ‘poetry’. Crucially, with the glaring exception of that Paradise By The Dashboard Light sequence, it just isn’t funny or thrilling enough to let that stuff slide.

Still, Danielle Steers as Zahara fully deserved the audience cheers for her vocal power and stage presence (although her role in the script was inexplicable – last minute cuts even in a show this length?) and Rob Fowler and Sharon Sexton really do look like they’re having fun up there. If only the show itself could be a bit more like that and a bit less like an old bloke’s indulgent – and sometimes sexually ambiguous – rock ’n’ roll fantasy. Unless that’s the point of the whole thing, of course. 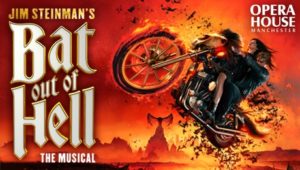 Bat out of Hell is at Manchester Opera House until April 8, 2017. For more information and tickets, click here.