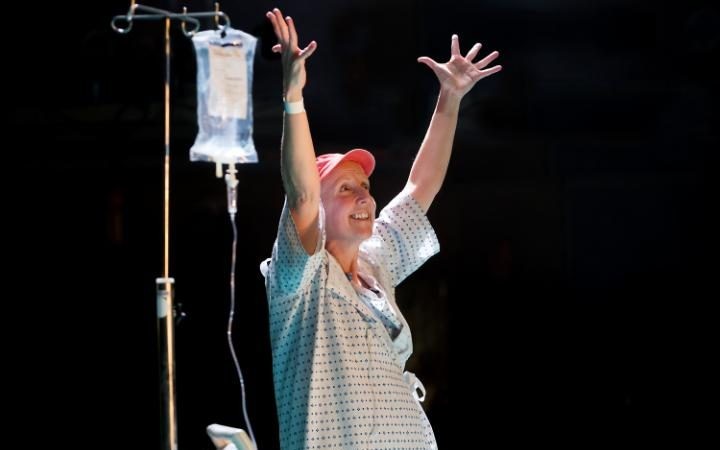 Julie Hesmondhalgh always makes me cry. Whether it’s during those last few scenes in Coronation Street when she portrayed Hayley Cropper’s final moments or as Sylvia Lancaster in the heart-wrenching Black Roses: The Killing of Sophie Lancaster, there’s something about Hesmondhalgh’s performances guaranteed to make me blub like a small child. So when I was offered the chance to review the Lancashire-born actress in a production of Wit at Manchester’s Royal Exchange, I jumped at the chance, a stash of tissues at the ready.

Wit is a story about words. Raz Shaw’s production of Margaret Edson’s Pulitzer-winning play centres around the importance of words and their meanings. In essence, it’s a series of monologues delivered by the central character, Dr Vivian Bearing, a professor of English literature, a specialist in the metaphysical poets and an expert in John Donne. Vivian is a scholar, a celebrated academic for whom academia is her sole purpose. She is also battling ovarian cancer. Her understanding of the written word is tested when she is faced with a debilitating illness; her disease has its own language, a language she can’t understand or master. The sophisticated poetry of Donne is replaced by clinical, alien terminology like hepatoxity and metastases. During a particularly distressing scene where Vivian is alone in her hospital bed, she is rendered speechless, unable to articulate her pain to the audience. 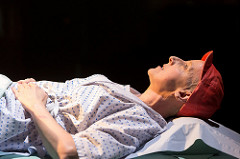 Single and alone (we learn that both her parents are dead, she never married and, during one interrogation from the senior physician, she reveals she chose not to have children), Vivian opts for an experimental and highly aggressive form of chemotherapy. Not the type of woman to sit back and wallow in fear or uncertainty, she chooses the maximum dosage, much to the terror of sweet-natured nurse Susie Monahan who questions the doctors’ methods and presents her patient with less-gruelling pain management, a shoulder to cry on and options for end of life treatment.

In a stripped-back production, props include wheelchairs, trays carrying surgical equipment and metal hospital beds. Cast members are kept to a minimum highlighting just how alone Vivian is in both her illness and her academic life. 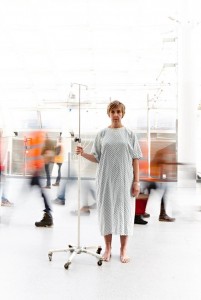 Nurse Susie observes that Vivian doesn’t get many visitors, to which the professor replies “none”. Despite the comic effect of Vivian’s quick quips, there is a latent sadness beneath her words. She is reduced to a lab specimen, a ‘thing’ of immense research value but with very little human importance. This is highlighted in one excellent scene where the pompously titled ‘Grand Rounds’ are taking place. The doctors talk to one another, ignoring the patient entirely or talking over her as Hesmondhalgh delivers a monologue to the audience. We are complicit in her loneliness.

Hesmondhalgh spends a great deal of time clad solely in a hospital gown and baseball cap, sitting in bed with only her illness for company. The staging is expertly thought out and intensely beautiful. The lighting is used to its full advantage, particularly in the poignant and surprising end scene which saw the packed theatre erupt into a thunder of applause.

Despite the knowledge that death is the outcome – we are told by Vivian in the opening act that death is almost certainly the final scene – Wit is directed without sentimentality. Shaw – who has had cancer and blogs about it – depicts a believable, intelligent and humorous account of one woman’s heroic battle against an all too common disease.

The tough subject matter is interspersed with witty asides from Hesmondhalgh – who has the audience in cahoots, chuckling away at her wit – and flashbacks to a young Vivian spending time with her father as a promising college student and tough lecturer.

Wit is part voyage of discovery. Hesmondhalgh’s professor is a tough woman of fierce and immense intelligence who values words and knowledge above people. In one scene, Vivian’s college professor urges her to spend less time in the library and more time “out in the world”. Vivian is perplexed and heads back to her books. It is not until she meets her oncologist Dr Kelekian and Jason, an ambitious medical researcher, that she begins to realise the importance of the human touch rather than the persistent and relentless pursuit of knowledge. 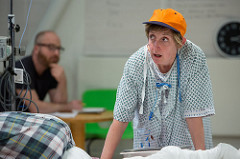 A play about cancer might not be everyone’s cup of tea. Let’s face it, the subject matter is far from light-hearted and there were times when I felt bogged down with grief for the intelligent, lonely woman I saw before me. But don’t let that stop you from seeing this exceptional play, exceptionally performed.

There are stellar performances from cast members, most notably Esh Alladi as Jason, the ambitious and curt medic who once attended Vivian’s poetry class and “loves cancer” because of the research possibilities it affords him. There’s also Jenny Platt as kind-hearted nurse Susie who serves as the human touch, reminding the staunch professor that it is normal to be afraid.

But the stand-out performance belongs to Hesmondhalgh who was utterly superb throughout and once again had me panda-eyed, reaching for the tissues.

Wit is at Manchester’s Royal Exchange until February 13, 2016. For more information, click here.